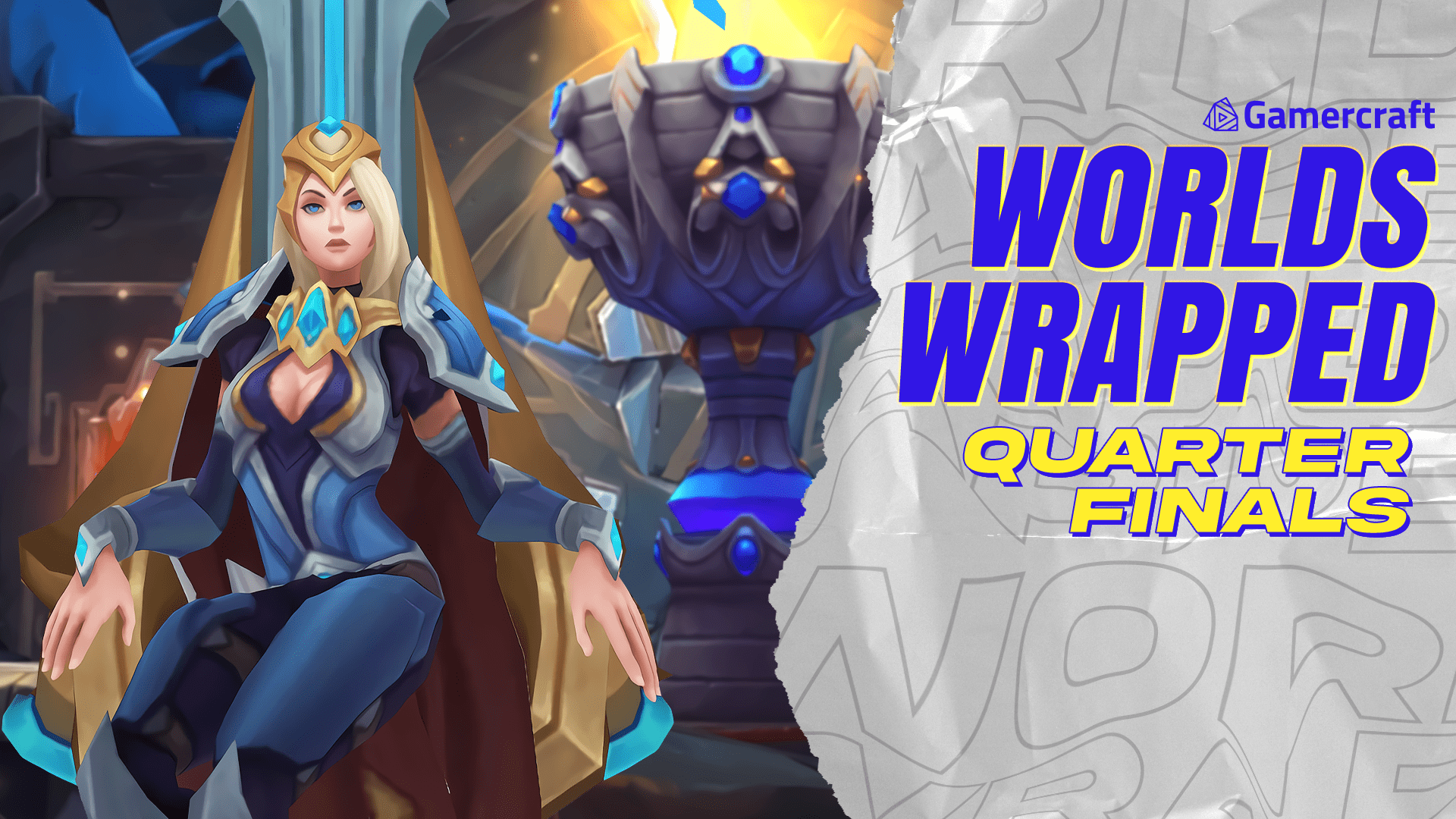 The second quarter final bout introduced another civil war as two titans from the LPL fought for a spot in semi-finals. EDG and RNG were looking to bounce back after LPL’s slump during the second round of group stage, but at the end of the series, only one LPL team would remain at Worlds.

RNG began the series with a convincing victory, getting ahead early and securing a very early Ocean Soul at 23 minutes. EDG attempted a Hail Mary play by trying to take the Elder Drake to even the playing field, but RNG were in absolute control and won the fight before the Drake could even be damaged:

Having lost game 1, EDG opted for the blue side and managed to secure the potent Yuumi/Ezreal bot lane while RNG responded with a surprising Annie mid:

Not only would Annie’s Tibbers provide a huge AoE stun in team fights, but she could also match the enemy Ryze’s roams using the movement speed provided by her E (Molten Shield). However, other aspects of RNG’s draft were a little more questionable, as the Xin Zhao and Alistar could be easily kited by the Olaf and Ezreal/Yuumi, meaning it would be hard to lock down the EDG comp. EDG were able to get ahead early when a fight in the bot lane went disastrously for RNG after Cryin’s Teleport was cancelled in the mid lane:

Off the back of this play, EDG established a 2k gold lead and used it to the snowball the game, cementing their victory with a team fight win around the Rift Herald:

The series was all tied up at 1-1 heading into game 3, and RNG turned to Xiaohu’s legendary Lucian top. By pairing this with a Galio mid, RNG were able to funnel Xiaohu some early kills thanks to some well-executed tower dives:

EDG realised RNG’s focus on the top side of the map and responded appropriately to gain control of the lead:

Once EDG had the gold lead, they held onto it with some good plays around the map resulting in a Cloud Soul. RNG had their backs against the wall, and forced EDG into a 50/50 Baron in a desperate attempt to come back into the game:

If that 30HP Baron Steal didn’t sting RNG enough, they attempted the play again only for history to repeat itself:

These two critical steals by Jiejie earned EDG a match point as they went up 2-1 in the series. With their tournament lives on the line, RNG rolled the dice and turned to the Annie mid once again, but this time paired with other strong team fighters (Kennen, Aphelios, Lulu):

This draft was vastly superior to that of game 2, and RNG demonstrated the true power of this team-fighting composition:

RNG dominated game 4, taking a Baron and used it to force a game 5 in less than 30 minutes:

A series of one sided affairs

As Silver Scrapes introduced the final game of the series, EDG once again turned to the Yuumi/Ezreal bot lane while RNG locked in Orianna and Gwen for the first time in the series. The Yuumi picked proved to be vital, as her innate sustain coupled with Moonstone Renewer allowed EDG to win an extended team fight in the early game:

Mirroring the rest of the series, the team with the early gold lead steamrolled to victory meaning EDG advanced to the semi-finals for the first time in the organisation’s history. They will play the winner of C9 vs GEN.G, who play tomorrow in the third semi-final match.

The LPL struck fear into every other region’s hearts going into the tournament, as many expected them to dominate across the board. However, between the week 2 group stage slump and today’s series that was littered with mistakes by both teams, perhaps the region’s strength has been misjudged. EDG will have to rectify their mistakes quickly if they want a shot at taking down the seemingly indomitable LCK.
‍

The reigning world champions Damwon Kia took to the stage today as they took on MAD Lions; the final LEC representatives were undoubtedly the underdogs heading into the series, and would have to remedy the numerous mistakes they made during the group stage if they wanted to take on the LCK titans.

DK dominate in game 1, but MAD bite back in game 2

Game 1 played out in a way that many expected heading into the series, as DK obliterated MAD in every single lane and stomped the game in less than 27 minutes. Given how MAD were slaughtered by DK’s incredibly early game, their draft in game 2 shifted to a much more proactive composition with a greater emphasis on early game plays:

Drafting Jayce and Jarvan IV had the potential to punish Khan’s Kennen during the laning phase, which MAD did repeatedly after a series of successful dives:

In a fashion mirroring DK’s performance in game 1, MAD snowballed this advantage in the top lane into an 8k gold lead and absolute control over the game. However, a series of over-aggressive plays in the mid lanes while the side lines were being neglected meant DK utilised their team fighting prowess to somehow go even in fights:

DK used this momentum to force MAD into a fight around the Baron, and featured an incredible play by Khan as he found the perfect Kennen flank:

Some criticism should be given to MAD for failing to track the level 16 Kennen with Flash/ultimate available, but Khan should be praised for his patience and playing around vision superbly. MAD were able to stabilise the game by denying 3 Baron buffs from DK and securing the Mountain Soul, which was incredibly helpful against the burst damage coming from Kennen and Jhin. Unfortunately, this wasn’t enough to save them as DK make a brilliant pick in the mid lane and finished the comeback victory after an 8k gold deficit in the early game:

Having just lost a game after such a dominant laning phase, MAD would have to dig deep and demonstrate true resolve to bounce back in game 3. Conversely, DK were heading into the third draft with all the confidence in the world as they proved they can win games regardless of the state of the game. DK opted for a poke composition in the third game by picking Jayce top and Ziggs bot, while adding some spice into the mix with a Pyke support:

Once again, DK had an excellent early game and continuously dove Armut’s Wukong by utilising Showmaker’s Teleport on Syndra. The long-range wave clear provided by Ziggs bot also allowed Beryl to freely roam on Pyke without sacrificing farm in the bot lane. Despite this early advantage, DK struggled to convert this into any meaningful objectives and were forced into a tricky fight around the Baron:

Using their team fighting skills and excellent team fighting comp, MAD found a small window back into the game. DK retained their strong gold lead, but the next few skirmishes were fairly even between the two teams and DK failed to push their advantages further:

In what turned out to be the final fight of the series, DK flexed their team fighting muscles and flawlessly split up MAD’s team fighting comp to pick off the Wukong and Gragas to advance to the semi-finals:

Damwon Kia have yet to drop a game so far in the tournament, and are validating their position as tournament favourites. Throughout today’s series, they demonstrated flawless proficiency at every stage of the game and proved they could win games with gold leads and gold deficits. Each member is an individual force of nature, while their team fighting cohesion is equally majestic yet cutthroat.

They play T1 in next week’s semi-finals in what will be a historic match between two of the most prolific organisations in League’s history.