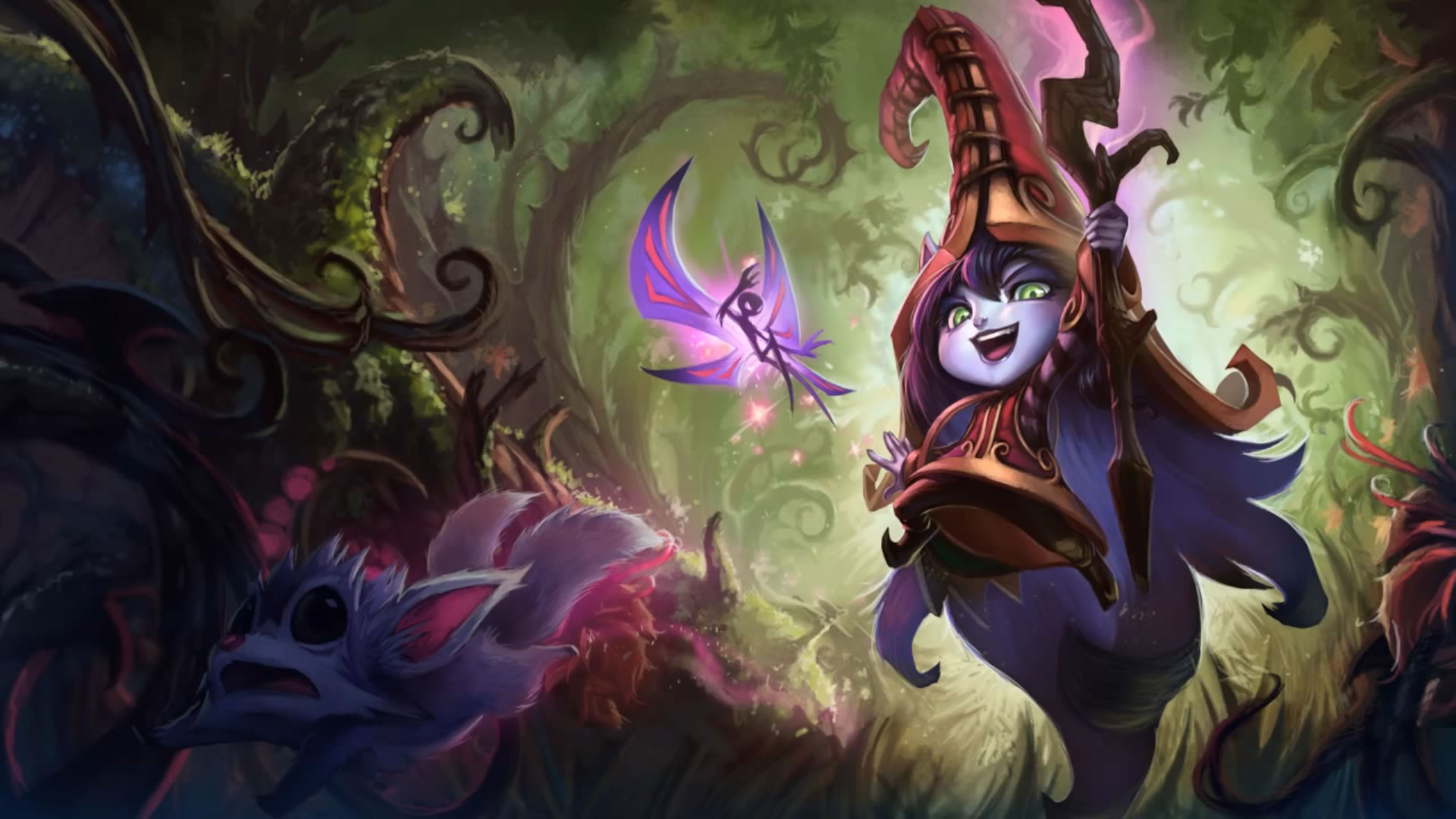 Lulu has proven to be one of the most consistently strong enchanters, with a slew of buffs for her carries and a fantastic ability to peel and protect. Outside of the support role, she can be flexed into the mid and top lanes, bullying her opponents out of lane before transitioning into the traditional enchanter role in the mid to late game.

Passive – Pix, Faerie Companion – Pix sends out damaging bolts whenever the ally he is attached to uses a basic attack on an enemy. These bolts are homing, but can be interrupted by other units.

Q – Glitterlance – Lulu and Pix each send out a bolt that damages and dramatically slows all enemies hit.

W – Whimsy – If used on an ally, it increases their attack and movement speed for a few seconds. If used on an enemy, it polymorphs the target for a short time, meaning they are slowed, cannot attack, and cannot use their abilities.

R – Wild Growth – Lulu enlarges an ally, knocking up enemies around the ally and granting them bonus health for a short time. While enlarged, allies emit an aura that slows nearby enemies.

If playing Lulu in the mid/top lane, Glitterlance (Q) should be the first basic ability maxed, followed by Help, Pix (E), then Whimsey (W).

Lulu has a moderately good attack range, meaning she can harass most melee champions without putting herself in too much danger. Remember Pix’s bolts can be intercepted by other units, so try and position yourself in such a way that the bolts will not attack minions instead of your opponent. Glitterlance (Q) is a great trading tool, which can be followed up with an auto attack while they are slowed.

One of Lulu’s best combos during the laning phase is a combination of Help, Pix! (E) and Glitterlance (Q). Pix sends out a Glitterlance in addition to Lulu, meaning you can use Lulu’s E to attach Pix to either a friendly or enemy minion before using Glitterlance to reach an enemy who is very far away. Enemies are often caught off-guard by this combo, so are unlikely to dodge it in time.

Help, Pix! (E) can also be used offensively to trade, as it deals a surprisingly high amount of magic damage in the early game. However, using E offensively leaves you and your ADC vulnerable considering you are not able to shield should the enemy engage. Whimsey (W) should primarily be used defensively in the early game due its very long cooldown and the fact increased attack speed is not as valuable in the early game. Therefore, use it to escape a gank from the enemy jungler or to polymorph the enemy if they engage.

Moving to the mid/late game, Lulu’s top priority is buffing her allies and protecting them from threats. Help, Pix! (E) should be used almost exclusively to shield your ADC, as they are protected and their auto attacks will be enhanced by Pix’s bolts. Whimsey (W) can also be used to buff your ADC, providing them with movement speed and bonus attack speed. However, don’t forget the power of being able to CC a fed enemy; it is a point-and-click CC that completely locks out an enemy for 1.25 seconds at rank 1 to 2.25 seconds at rank 5. A common mistake while playing Lulu is only using Whimsey to buff your ADC, when it can be more powerful as a CC tool.

Wild Growth (R) is a similarly diverse move. It can be used to save an ally by instantly granting a lot of bonus health, or as an engage/disruption tool by using it on a front-liner who is in the middle of the entire enemy team. This knock-up can be incredibly effective for champions who synergise with knock-ups, such as Samira or Yasuo. Don’t feel as if Wild Growth must always be saved for an ally: use it on yourself if you are in danger, as you can’t buff or protect your team if you are dead!

Moonstone Renewer and Shurelya's Battlesong are both excellent Mythics for Lulu. Shurelya's is better if your team is ahead or has a lot of engage/skirmish potential, while Moonstone is best if your team is behind or you have a lot of vulnerable carries to protect. Lulu benefits greatly from Ability Haste, meaning Ionian Boots of Lucidity is a great item for her. The rest of Lulu’s build is dependent on the situation:

Lulu is a consistently strong enchanter, with an incredibly eclectic kit that provides her with a lot of tools and options. Mastering Lulu is less about skillshot accuracy and more about making optimal decisions, knowing when and how it is best to use her Whimsey, Help, Pix!, and Wild Growth.