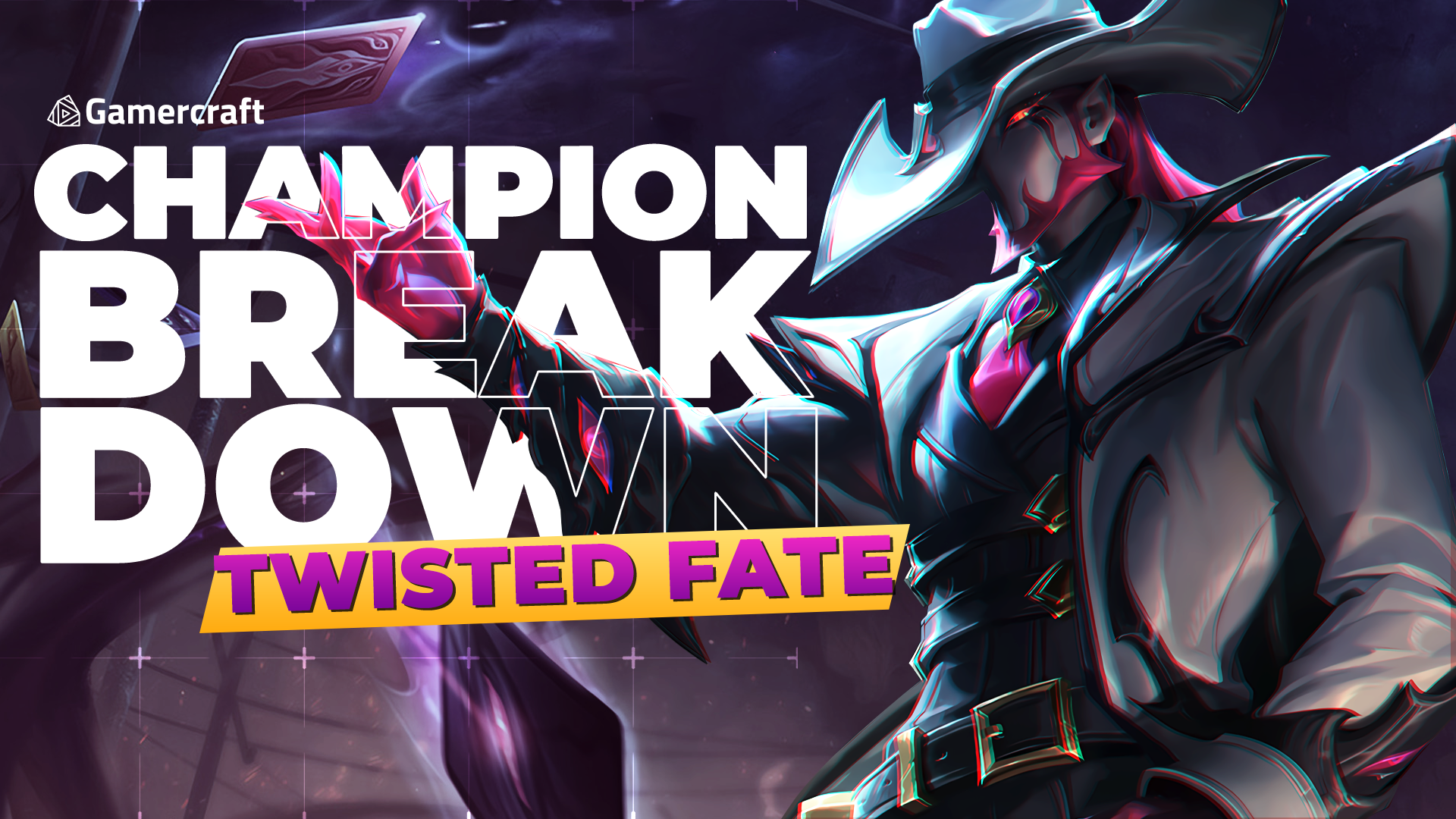 Twisted Fate is one of the most consistent mid laners in League thanks to his flexible kit and propensity to make game-changing macro plays.

Q - Wild Cards - Twisted Fate sends out 3 cards in a cone, dealing damage to anybody they hit.

Recasting Pick a Card locks whichever card is currently hovering above him, and augments his next basic attack within 6 seconds to deal bonus magic damage and apply an additional effect:

During the laning phase, locking a target down with a red or gold card from your W (Pick a Card) and following up with a Wild Cards is your most effective combination. You can pressure your opponent away from killing minions by casting your W, allowing the cards to hover above you, and moving forward to threaten them. Locking in a gold card can also push them back and make them play defensively. Given Twisted Fate’s high mana costs, it’s important to not only use your W on the enemy, as restoring mana by using your blue card on minions is just as important. Keep track of how many stacks of Stacked Deck (E) you have when attacking minions, as you may not secure last hits if you are not anticipating the bonus damage upon reaching 3 stacks.

Once you reach level 6, pushing out waves and looking to roam becomes Twisted Fate’s focus thanks to his incredibly strong ultimate. Pushing out the minion wave and then moving into the fog of war can throw your opponents off, as they lose track of you and become unsure which lane you are looking to gank. Keep your eyes on the map as much as possible and look for opportunities to teleport to a side wave with your ultimate, such as by teleporting behind an over-extending enemy to 2v1 flank them, or joining a side lane that is being ganked by the enemy jungler to even out the fight. Here is an a great use of Destiny by FNC Nisqy, who pushes out his wave, moves into the fog of war, then uses his ultimate to set up a tower dive on the G2 bot lane:

Twisted Fate’s damage can fall off as he transitions into the late game, so it’s important you adapt and be effective in other ways. Twisted Fate has incredible split push potential thanks to Destiny, as is able to push out side waves to draw pressure, then teleport into any fight and join his team mates.

Teams can often be flustered when faced with multiple pressure points on the map and can falter during these moments of panic, so look for opportunities to be as annoying as possible on the side waves and take down towers/inhibitors. Keep in mind that your W (Pick a Card) will enhance your next auto attack against a turret, with blue card dealing the most damage, so remember to use that ability whenever you are taking towers.

Destiny can also be used as a scouting tool and to check if the enemy is taking the Dragon or Baron, providing crucial information to your team.

Though your damage may not be as high during late game team fights, your CC chain can still shut down any hyper carry on the enemy team, so keep an eye out for any over-extending carries or opportunities to Flash + Gold Card to start off a fight.

Everfrost and Rapidfire Cannon is Twisted Fate’s bread and butter combo; Everfrost provides an additional layer of CC once a target has been locked down with your red and blue cards, while Rapid Firecannon extends his auto-attack range meaning you can CC targets from an absurdly long range. Ionian Boots of Lucidity provides an important amount of Ability Haste and ensures Twisted Fate can cycle through his spells as much as possible. Zhonyas Hourglass is useful against AD threats and can buy you the couple of seconds you need for your W to come off cooldown, meaning you can CC the enemy and make your escape.

Finally, Lich Bane and Rabadon’s Deathcap can finish off the build, further enhancing your auto attacks and split pushing potential, and dramatically increasing your AP in the late game.

It’s hard to imagine a meta where Twisted Fate is not a strong champion, thanks to his point-and-click CC and ability to roam around the map with his ultimate. Take advantage of his split-push potential during the later stages of the game, and don’t be afraid to look for creative plays with his ultimate that might catch your opponent off guard!