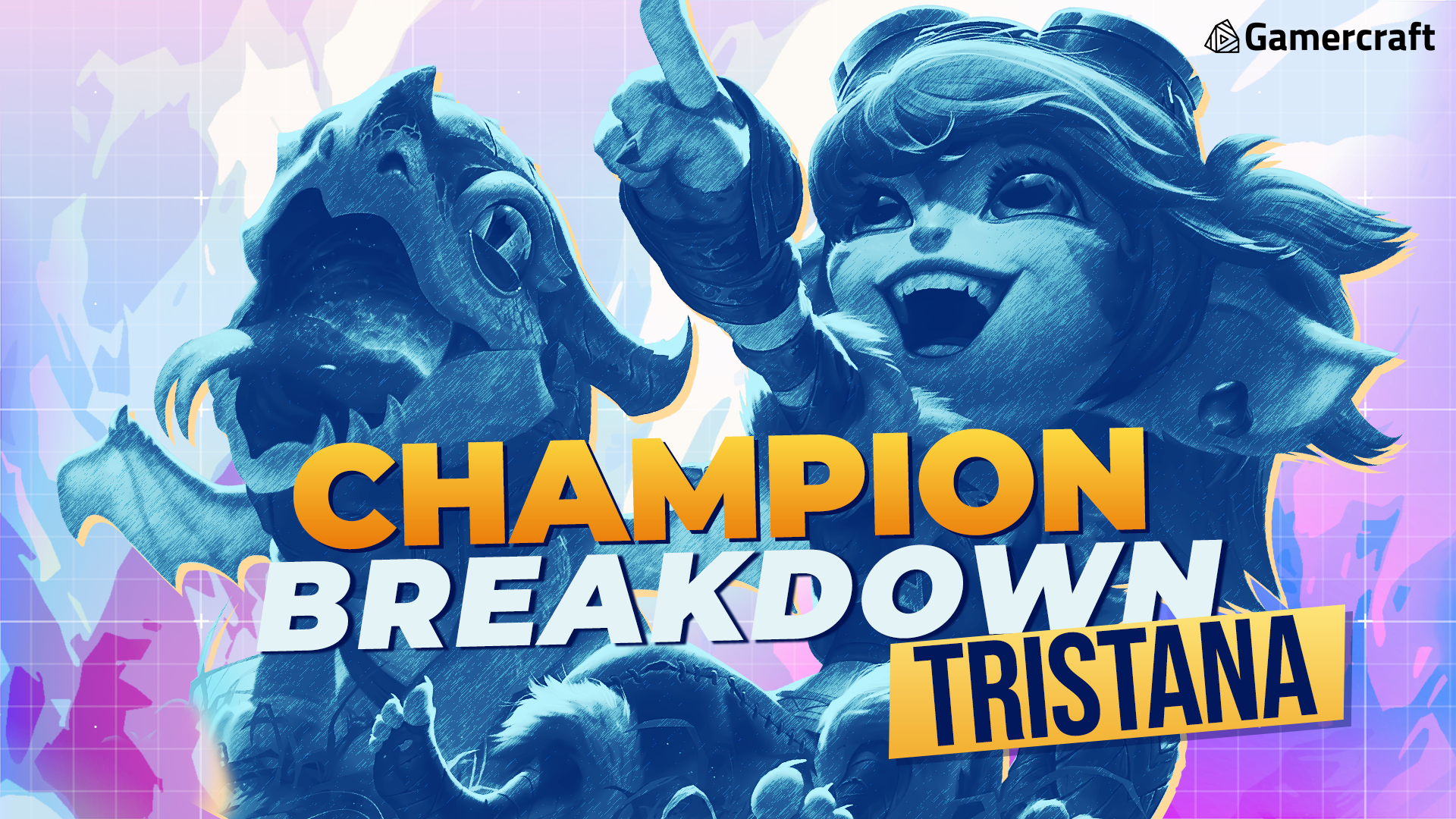 As a consistently strong ADC that can be flexed into the mid lane, Tristana offers high burst, mobility, and excellent scaling into the late game.

W - Rocket Jump - Tristana jumps to a target location, damaging and slowing enemies she lands on. Its cooldown is reset if she scores a takedown (assist or kill) or detonates Explosive Charge (E) at maximum stacks on a champion.

Actively, Tristana attaches an explosive charge to an enemy, which will explode after 4 seconds. Landing a basic attack or Buster Shot (R) against the target with the charge attached to them will increase the damage dealt by the explosion. This can stack up to 4 times, at which point the charge will instantly detonate. Explosive Charge can be used on enemy turrets, and has an increased explosion radius.

R - Buster Shot - Tristana launches a cannonball at an enemy, dealing magic damage. This also knocks back the target and all enemies around them, and stuns them for a short amount of time.

Playing Tristana for the first time can be a slightly jarring experience, as the damage dealt by Explosive Charge’s (E) passive every time you last hit a creep can disrupt your last hitting. With time and practice, this will become familiar and you will learn to account for the splash damage while still securing the important last hit on creeps. This also means that you will be in a pushing lane most of the time, so you need to be vigilant of how vulnerable you are to ganks and ensure your warding is covering you sufficiently.

Despite having very strong scaling into the late game, Tristana’s early game is pretty good too. If your jungler ganks, your support engages, or the enemy over-extends, look to use Rocket Jump (W) onto them to slow them, use Explosive Charge (E) and Rapid Fire (Q) to quickly apply some stacks and deal a good chunk of damage. Assuming your Explosive Charge (E) has reached maximum stacks and your Rocket Jump (W) has reset, you can then use it to either slow the enemy again if you think you can secure a kill, or jump away to avoid taking damage back.

​​As Tristana gains levels and scales into the late game, her range becomes dramatically enhanced thanks to her Passive and the attack speed granted by Rapid Fire (Q) becoming more valuable as she gets more AD. Therefore, she is able to deal great amounts of damage from the backline without putting herself in too much danger.

During team fights, Tristana will be looking to do the same thing as in the laning phase: stack up Explosive Charge on a target using Rapid Fire, and use the Rocket Jump reset for mobility. However, how you use Rocket Jump will differ depending on the situation. If there are assassins looking to blow you up, you should save Rocket Jump to escape. Meanwhile, if there are low targets you can quickly blow up, use Rocket Jump to move forward, secure the kill, and continue pressing forward thanks to the reset.

Buster Shot (R) is a powerful tool in the late game thanks to its diverse uses: it can be used as a finisher, disengage tool for Tristana, or a CC tool used to control areas around objectives. In team fights, it works similarly to Rocket Jump as you will need to consider whether it’s best to use it offensively or defensively.

Kraken Slayer is a great choice for Tristana, as it amplifies her damage when stacking up Explosive Charge stacks, but Galeforce is also a viable option should you want the extra mobility. Phantom Dancer and Infinity Edge work really well as her third and fourth item considering how much Trist wants to crit with her auto attacks. Defensive items, such as Guardian Angel and Bloodthirster, can round out the build.

Tristana is a consistently strong pick, with great snowball potential and a kit that is fairly simple to pick up and learn. Mastering Tristana relies upon deciding when and how to use her Rocket Jump, alongside maximising how many auto attacks she can deal out.