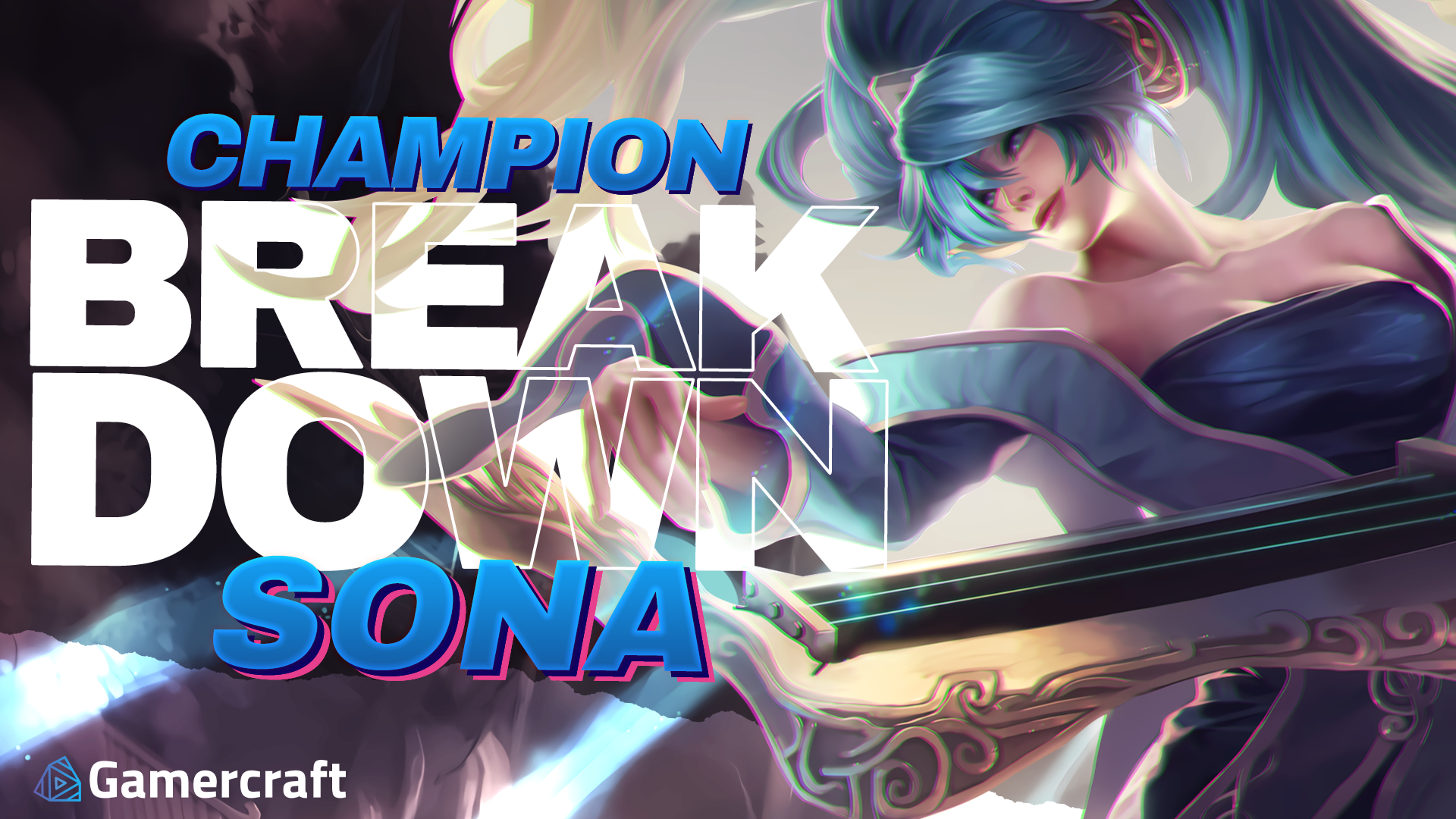 Champion Breakdown: A Guide to Sona

After a mini-rework in patch 11.16, Sona has received a new lease on life and is proving to be an excellent pick in the support position. Her kit is very easy to pick up, though there are a lot of opportunities for skill expression and maximising this musical virtuoso.

Passive – Melody: all of Sona’s basic abilities generate an aura around her, which empowers her and all allies that enter the aura. After casting a basic ability, all other basic abilities are placed on a 0.5 second cooldown.

Passive - Power Chord: after casting 3 basic abilities, Sona’s next basic attack deals bonus damage and has an extra effect based on the last basic ability cast.

Passive - Accelerando: Every time Sona hits an enemy with her Q (Hymn of Valor) or aids an ally with her W (Aria of Perseverance), Sona gains a stack of Accelerando up to a maximum of 120. Each stack provides 0.5 basic ability haste, capping at 60 basic ability haste at max stacks. Upon reaching maximum stacks, gaining a stack of Accelerando will instead reduce the cooldown of her ultimate (Crescendo) by 1.5 seconds per stack.

W - Aria of Perseverance: Sona heals herself and the most wounded nearby ally. Its Melody aura provides a shield to nearby allies, while Sona gains a stack of Accelerando every time she heals an ally or shields an ally for a minimum amount of damage. Its Power Chord effect reduces the damage dealt by the enemy hit by Sona’s next basic attack.

E - Song of Celerity: Sona gains movement speed for 3 seconds, increasing to 7 seconds if she doesn’t take damage. Its Melody aura increases the movement speed of nearby allies, and its Power Chord effect slows the enemy hit by Sona’s next basic attack.

During the early game, your priority will be poking your enemies as much as possible to generate gold from your Spellthief’s Edge and to accumulate Accelerando stacks. However,  Sona is very vulnerable in the early game to ganks or any engage supports, so temper your aggression and don’t over-extend just so you can land a Q (Hymn of Valor). Sona’s W (Aria of Perseverance) costs a lot of mana in the early game and should be used sparingly; it’s best used when you are under attack, as this will take advantage of its shielding aura and potentially grant stacks of Accelerando.

The best use of your Power Chord passive is situational. Hymn of Valor increases the damage of your next basic attack, and is best used when trading in lane to maximise your damage. Aria of Perseverance reduces the damage dealt by an enemy, so works well when you are under attack. Song of Celerity slows the next target hit by your basic attack, and is great for setting up ganks from your jungler or escaping from an enemy.

Power Chord resets your basic attack timer but isn’t consumed when used on a ward. This means Sona can quickly clear vision by casting a basic ability (Q, W or E) every time after she attacks a ward, as demonstrated here:

Once the laning phase has ended, it becomes much riskier to generate Accelerando stacks with Hymn of Valor (Q) given how dangerous it is to get so close to enemies. Therefore, your Aria of Perseverance (W) will become your main source of gaining stacks, as you have the mana to spam it after completing some items. Remember, you gain a stack every time you heal an ally and shield them for a minimum amount of damage, so here are some overlooked opportunities for you to easily gain stacks:

-When allies are clearing a minion wave or jungle camp

-When allies are taking an objective

-When allies have just recalled and are standing in the fountain

During team fights, your objective will be to stay alive to cycle through your basic abilities as much as you can; stay close to your teammates so they can protect you and you can provide all of them with your powerful auras. Crescendo is a very powerful team fight tool, and can be used to catch out an over-extended enemy carry or to protect your team from incoming enemies. Don’t be afraid to pull the trigger and go for a Flash + Crescendo combo if you spot a lot of enemies clumped together and your team can follow up, as this will often catch your opponent off-guard and guarantee you a team fight victory.

Tear of the Goddess is essential on Sona due to how often you are cycling through abilities, and is best bought on your first recall so you can start accumulating stacks as soon as possible. There is no need to upgrade it to Archangel’s Staff/Seraph’s Embrace, as your limited income is best spent on other items.

Moonstone Renewer is an exceptional item on Sona, as it is extremely easy to proc thanks to how often Sona is attacking enemies and empowering her allies in combat, and the heal/shield power provided greatly increases the power of your W (Aria of Perseverance). Other Enchanter items work very well on Sona, and the best choice will depend on the state of the game. Both Ardent Censer and Staff of Flowing Water can easily be granted to all allies thanks to the shielding aura provided by your W, so pick up Ardent Censer if your AD allies are fed or Staff of Flowing Water if your AP carries are popping off. Chemtech Putrifier can be procced just as easily and will shut down teams with a lot of healing, while Redemption is a consistently good pick thanks to its active and 20% increase to your heals and shields.

Sona’s role pivots from a poke-mage in the laning phase to an enchanter during team fights. Mastering this champion requires excellent positioning, an astute level of awareness during team fights, and looking for every opportunity to generate Accelerando stacks without putting yourself in danger.