Here at Gamercraft, we want to provide the most frictionless, smooth, and premium competitive experiences in the amateur esports scene. We are making it easy for amateur players, teams, and esports organizations to join tournaments, compete, and find new ways of growing and improving.
‍
Our mobile app and tournament platform was designed to allow amateurs to access professionally produced tournaments. Our tournaments are rank and skill adjusted, with ever-evolving anti-smurfing measures, so that you always compete against gamers of your own rank and minimize bad competitive experience. In short, we are not only going the extra mile to stop smurfers and cheaters but also to create a competitive ecosystem where you and your team can thrive and leave your mark.

For the duration of our Beta stage, most of our tournaments will be short-form (single elimination, 8-team tournaments) with no big time commitments and motivating prize pools. Though there might be some bigger or longer tournaments the typical bracket looks like this: 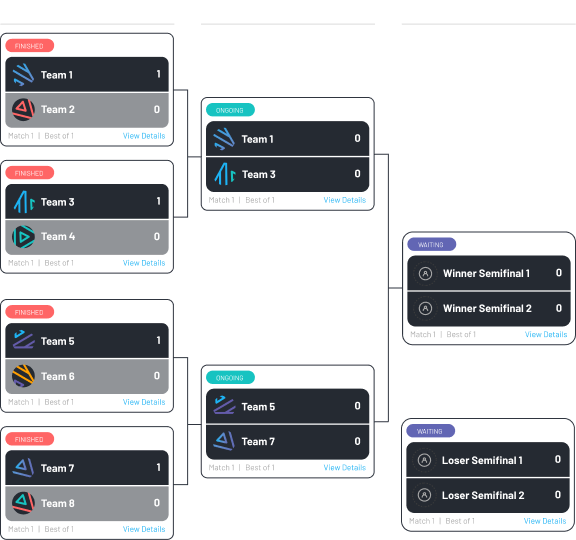 A type of tournament where teams are eliminated after one loss. The winners of the matches advance until the final, where only one team can win.

A type of tournament where teams are eliminated after two losses. The tournament has two brackets: one for the winners (undefeated) and one for losers (the teams with one loss). This tournament has a grand final where the winners of both brackets face each other.

A League is a competitive structure where all participating teams face each other at least once (or twice). Every match gives the winner a predetermined amount of points, thus creating the standing and ranking tables.

A bracket is the stage or stages, depending on the format, of a tournament. For instance, one might refer to the Semifinal Bracket and that includes the two semifinal matches. Brackets are connected with other brackets and make up the tournament tree.

A match is when teams face-off in a specific tournament stage (Quarterfinals, Semifinals, Final). A match may be composed of one (1), three (3), or five (5) games.

A game is a subset, a component, of a match where teams face each other and have their own scores.

In the Gamercraft app, the BO1, BO3, BO5 acronyms mean Best of X.  The X determines the number of games in a match. A Best of 3 (BO3) match has 3 games where a team needs to win at least 2 games to advance.

Smurfing is when a highly-skilled player creates a secondary account as a disguise to play against less proficient opponents. To clarify, smurfing is prohibited in Gamercraft.  (Credit to Inverse.com)

Repeated user inputs of any type meant to disrupt communication, gameplay or operations

Threatening or attempting violence towards anyone for any reason at any time, including, but not limited to:

Includes but not limited to accounts, teams, etc.

Participating in tournaments from a banned state

Participating in tournaments outside of the specified rank specified and intended

Participating while evading an active ban

Repeatedly joining tournaments and failure to show up

Being killed repeatedly to assist the opposing team