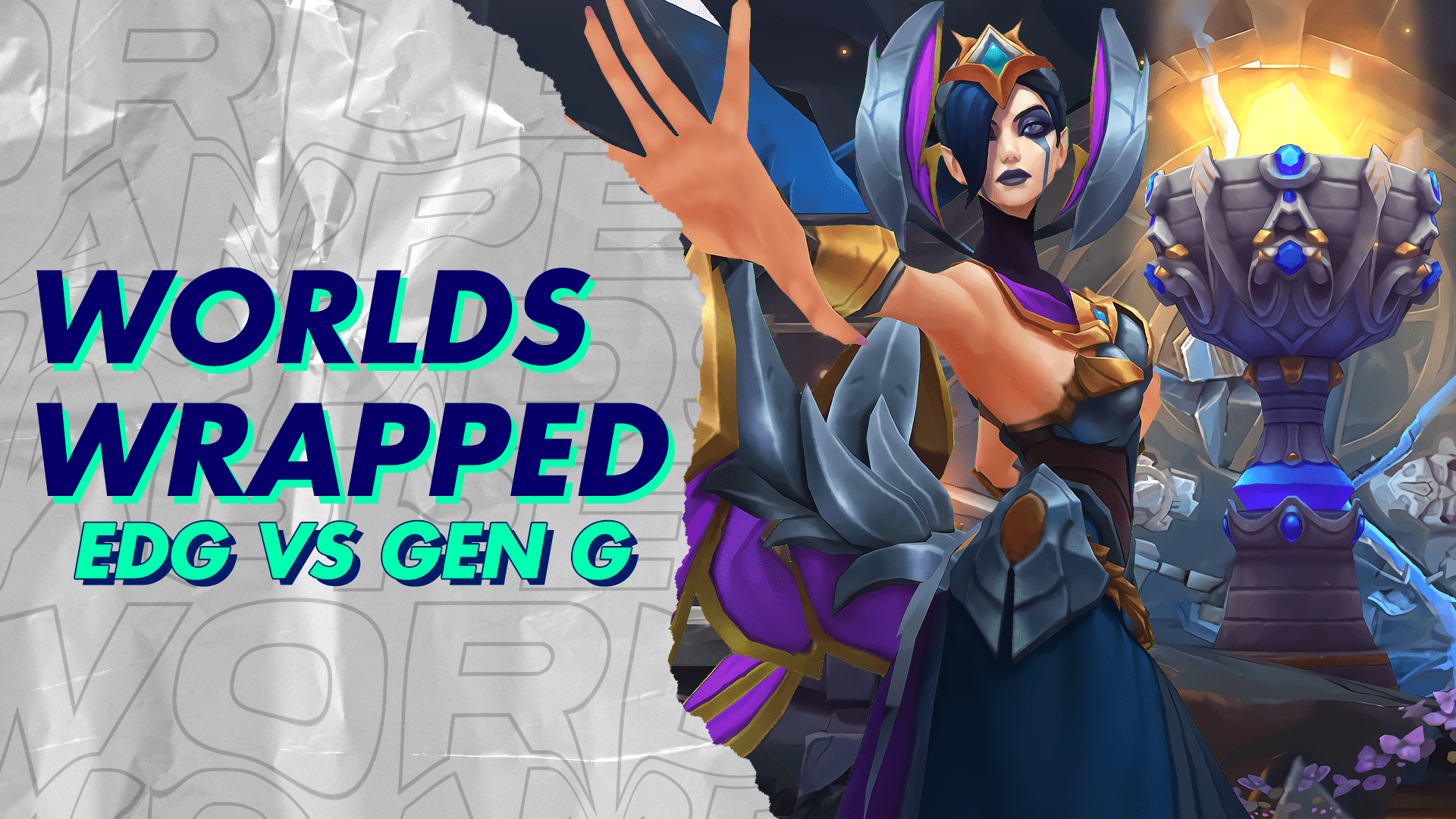 The last hope of the LPL took to the Rift in the second semi-final of Worlds, as EDG fought Gen.G for a spot in the finals; let’s break down the highlights from the series.

Game 1’s draft saw a surprise for Gen.G as they opted for a double enchanter team comp by locking in Seraphine mid and Lulu support; EDG replied with a more standard comp with the potent Lucian/Nami bot lane and team fighting power from the Jarvan IV and Orianna:

The series began with a back-and-forth early game, as the gold difference remained close and neither team were able to take a meaningful lead in skirmishes:

Despite being in a minor gold deficit, Bdd found some crucial CC on Viper’s Lucian, allowing Gen.G to win a team fight convincingly and convert their numbers advantage into a Baron:

However, EDG played excellently while on the back foot and mitigated Gen.G’s Baron power play, manipulating the waves well to limit Gen.G to only taking down one turret with their buff. Although Gen.G were able to secure another Baron thanks to another pick by Bdd onto Viper’s Lucian, EDG had earned themselves Mountain Soul point:
‍

This afforded EDG absolute control over the game, and enabled them to take a Baron for themselves and use it to break open Gen.G’s base. With the Elder Drake spawning imminently, EDG drew all of Gen.G to the drake pit while Flandre’s Jax split pushed to victory:

While the first game was quite close, Gen.G dominated in the second game starting with some early kills, the first tower, and the first Rift Herald. They extended their lead with an assertive team fight, using their multiple forms of CC to tear apart EDG:

EDG were forced to make a desperate Baron attempt, but were thwarted by a great Smite steal from Clid; Gen.G used the Baron to end the game, tying the series up at 1-1:

Bdd locked in Zoe for the third game of the series, a pick he has excelled on throughout the tournament, while EDG opted for a scaling comp between the Viktor mid and Gwen top:

Given the power of EDG’s scaling, Gen.G would have to get ahead early in order to have a chance of taking the game, which they did during a fight around the Rift Herald:

EDG staged a comeback by punishing Gen.G for attempting to sneak away the Baron:

This play not only lessened Gen.G’s advantage in the game, but also bought time for EDG’s comp to scale to the point of power. Their Gwen and Viktor had come fully online, and Gen.G found themselves on the back foot. However, a phenomenal flank by Rascal’s Renekton secured a victory for Gen.G in a close ending to the game:

After an incredibly tense game 3, the fourth game in the series was a one-sided affair in EDG’s favour starting with an unusual skirmish around the Raptor camp:

With a fed Zoe, EDG steamrolled the game and cemented their victory with a fight around the Ocean Drake, bringing the series to Silver Scrapes:

Both teams pivoted in the draft for the final game, opting for two engage supports with Rakan and Leona and split push pressure with Renekton, Graves, Orianna and Ryze:

EDG struck first in the mid lane with an exquisite gank by JieJie’s Jarvan to secure first blood for Scout’s Ryze:

Between an excellent teleport in the bot lane and some questionable decisions made by Gen.G, EDG were able to extend their gold lead with a definitive team fight victory in the bot lane:

EDG continued to press their advantage and retained their composure in such a high-stakes game, taking the first two drakes and establishing a 5k gold lead by 23 minutes. With their backs against the wall and their tournament lives slipping through their fingers, Gen.G had a final roll of the dice in a team fight around the drake pit:

Unfortunately for Gen.G, this wasn’t enough to bring them back into the game as they were unable to pull off their wombo-combo, allowing EDG to continue asserting their dominance. After securing the Cloud Soul and the Baron, EDG closed out the series and advanced to the Worlds finals:

Gen.G should be proud of their Worlds run, as many doubted whether this team would even make it out of groups but did so with finesse thanks to some remarkable performances by Bdd. The series was a hard fought battle as both teams were fairly even throughout, but EDG were versatile and demonstrated impressive mental fortitude by bouncing back from a 2-1 deficit. Nevertheless, they face a goliath in next week’s final against Damwon Kia, and are no doubt the underdogs heading into the series; they will have to pull off a stunning upset if they want any chance of dethroning the LCK titans.