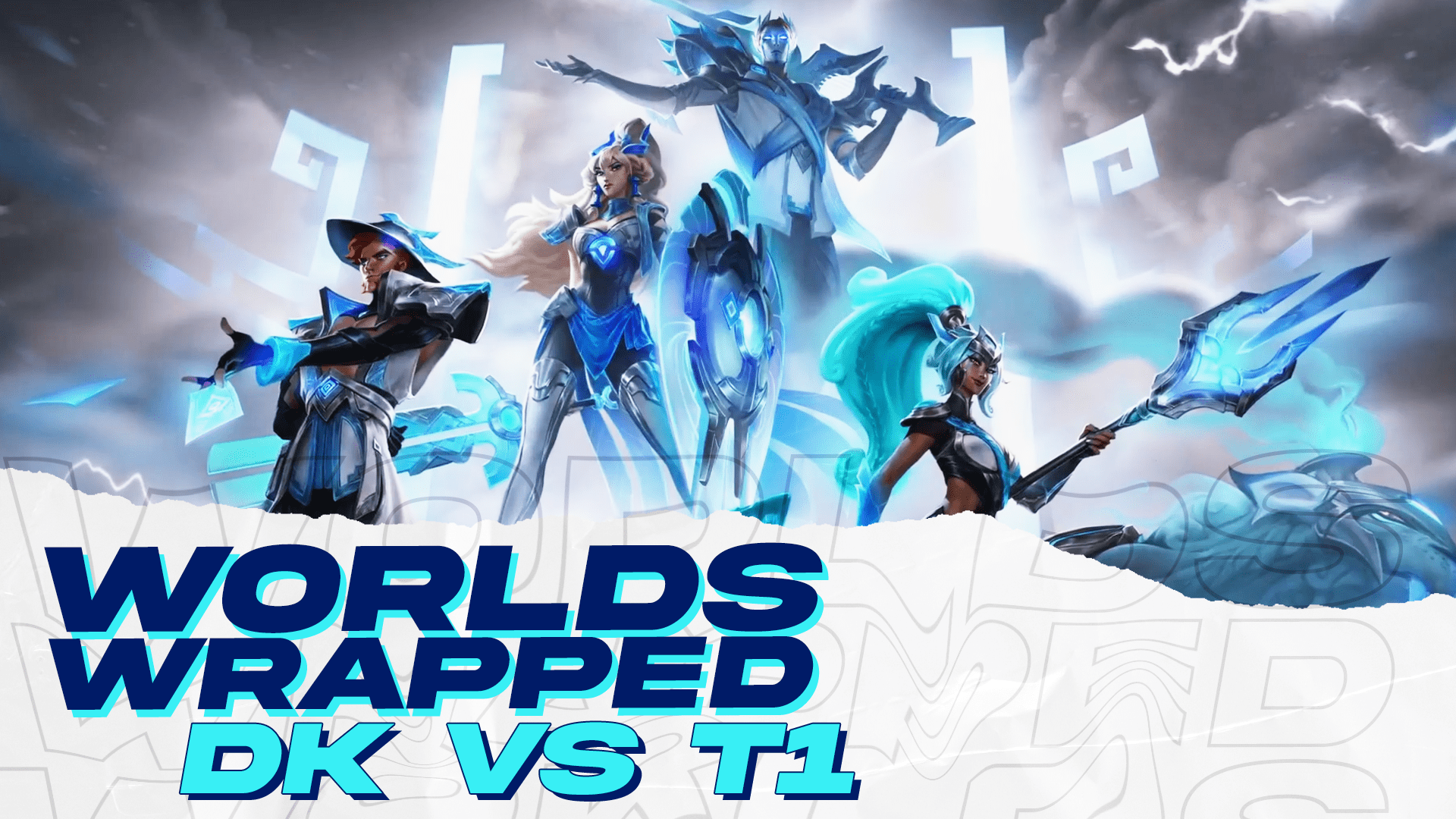 The first semi-final of Worlds saw two titans of the LCK fight for a place in the final: T1, the most decorated organisation in League’s history, faced Damwon Kia, who were looking to claim that title for themselves.

DK strike first, but T1 bounce back in game 2

Both teams opted for 1-3-1 comps in game 1, as DK locked in Lucian top and LeBlanc mid while T1 replied with a Jayce top and Faker’s signature Ryze. A surprising Maokai support was also locked in for DK to provide a lethal CC chain in combination with Ghost’s Jhin:

The early game was very close, as DK and T1 traded even blows across the map:

DK were able to eke out a minor advantage with some impressive map plays, as they were able to secure two Rift Heralds, Drakes, and all 3 outer turrets within 20 minutes. As the map opened up, their pick comp became even more threatening and the use of Jhin traps and Maokai saplings helped cement control over brushes and the fog of war. ShowMaker then made a crucial pick on LeBlanc, earning DK a Baron by 24 minutes:

With the Baron buff empowering their minions, DK pushed in their waves to take inhibitors and eventually the Nexus after decimating T1 in their base. Spicy picks continued into game 2 as Canna locked in Yasuo top alongside Lee Sin and Rakan to provide some additional knock ups, while Faker selected Lissandra as a counter-pick against ShowMaker’s LeBlanc:

Game 2’s early game followed in a similar fashion, with neither team being able to establish a meaningful lead:

The mid game remained extremely even, as both teams maneuvered around each other and played the map very intelligently, demonstrating the poised yet methodical gameplay that the LCK is known for. An explosive team fight was simmering away through the midgame, and eventually erupted around the Ocean Drake:

Faker’s brilliant teleport flank helped earn T1 an ace and control over the game. An extended Baron dance then took place, with neither team committing due to the nearby threat of the enemy team. DK eventually pulled the trigger and attempted to take the Baron:

With their Baron buff, T1 took the game to even up the series at 1-1 and hand DK their first loss of the tournament.

Zilean support gets locked in

The spicy support picks continued in game 3, as Keria locked in Zilean support for the first time in the tournament and Beryl reverted back to the Maokai support:

The Zilean was intelligent choice, as it could speed up the Jhin who already has increased movement speed in his kit, the Kennen and Xin Zhao who want to dive the enemy, and could resurrect an ally who was being focused by the burst damage provided by Lucian, Jarvan IV, Syndra and Miss Fortune. Nevertheless, T1’s comp was all about scaling and struggled in the early game, surrendering a couple of early kills, the first tower, and the first Rift Herald to DK:

T1 were able to stabilise the game and prevent it from spiralling it out of control, and found an excellent team fight in the mid game from an unexpected engage from Keria’s Zilean:

This team fight victory was converted into a Baron and absolute control over the game, as T1’s scaling composition had come online. With all the safety and mobility provided by the Zilean, T1 were able to play with unbridled aggression to break open DK’s base:

T1 took another Baron and used it to destroy the Nexus, earning themselves match point against the reigning world champions. In game 4, ShowMaker secured his signature LeBlanc and used it to completely dismantle T1, obliterating them in a 30 minute game and finishing the game with 25 Mejai stacks and a 11/0/3 scoreline:

As Silver Scrapes introduced the fifth game of the series, both teams turned to comfort and champions they have demonstrated complete mastery over:

Gumayusi locked in Aphelios after going 15-2 on the champion throughout the year and once again paired it with Keria’s Zilean, while ShowMaker secured his signature Zoe. T1’s comp was geared toward team-fighting between the Azir and Kennen, while DK had a lot of pick and poke potential with their Talon, Zoe and Ziggs picks. The early game was extremely close yet again, with DK taking the first turret and the first two drakes on the bot side while T1 focused top side to secure two Rift Heralds. With the gold completely even, the first team fight broke out at 23 minutes:

T1 played around their vision denial extremely well, but ShowMaker and Ghost salvaged the fight with their pinpoint accuracy and prevented T1 from taking the Baron. As DK were able to secure the third Mountain Drake and earn themselves an early Soul Point, T1 were forced to choose between the yielding the Baron or Mountain Soul:

This incredible display of patience, poise and intuition from Canyon cemented why many regard him as the best jungler in the world, as it denied T1 from taking a sneak Baron and ensured DK could take the Mountain Soul. With the game, the series and their tournament lives slipping away, T1 were forced to rush the Baron:

Though DK were only able to destroy one inhibitor, it did augment their control over the game. With an Elder Drake spawning imminently, the series would be decided by a team fight around the Elder:

With that decisive team fight victory, DK took down T1 and advanced to the Worlds final for the second year in a row.

This was an absolutely phenomenal series, as T1 had ramped up over the last few months and were able to match DK after struggling to do so during the LCK regular season. However, the day belonged to DK who demonstrated indomitable resolve to bounce back from being 2-1 and impeccable gameplay. Though they still have one more team to defeat before they can claim the back-to-back championship, it feels like they have already crushed the team that could contest their throne.