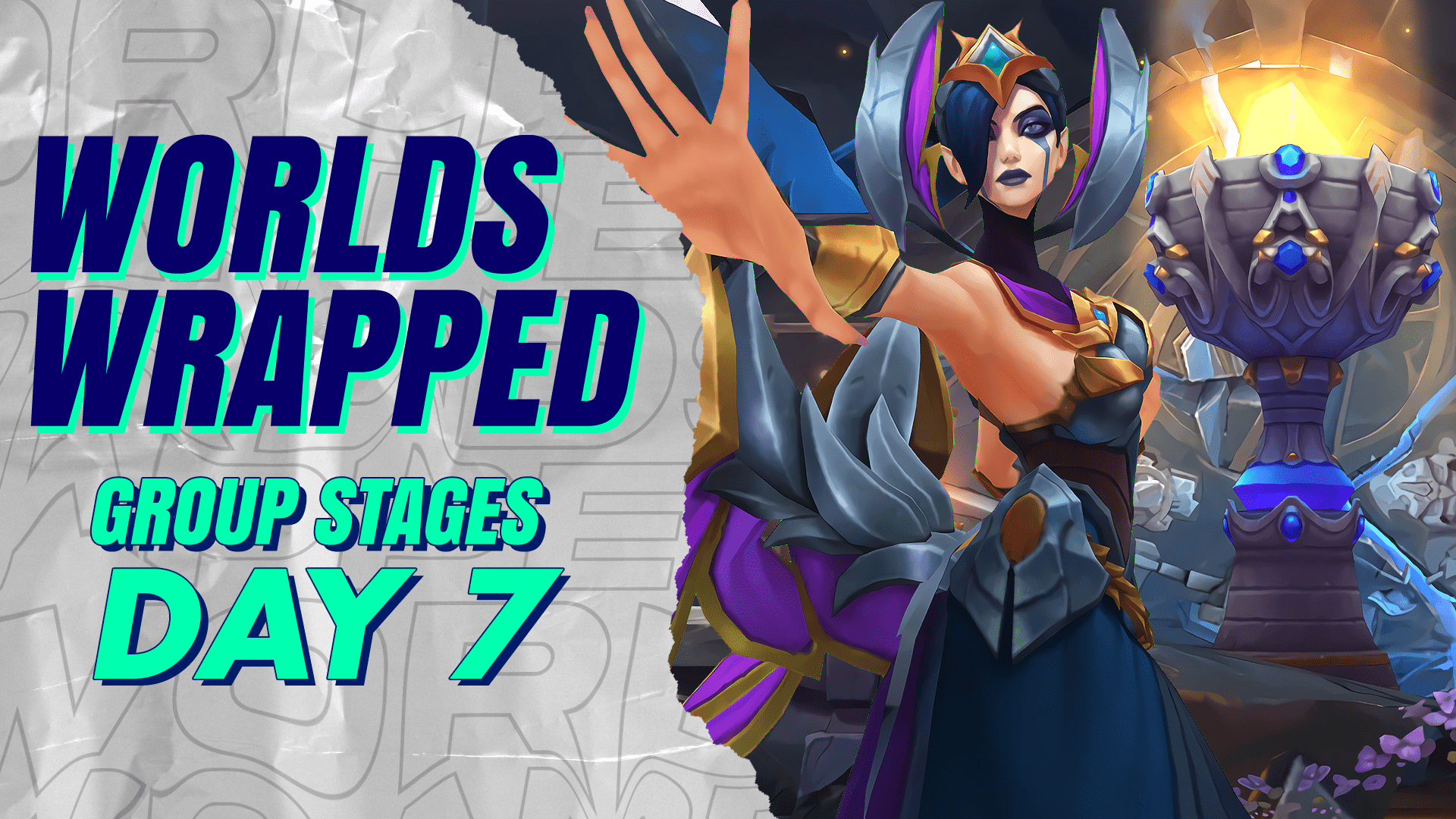 The final day of the Group Stage went out with a bang as Team Liquid, Gen.G, MAD Lions and LNG Esports all finished the group with a 3-3 record, marking the first time in Worlds history a group has ended with a 4-way tie. Each team’s fate was therefore decided by a single best of one elimination match, with TL taking on Gen.G and MAD facing LNG.

Team Liquid had shown signs of brilliance throughout the day, particularly when playing around objectives, and started off their tiebreaker match well after some successful plays in the top lane got Alphari’s Jayce ahead:

However, Gen.G were able to wrestle back control of the game after a series of incredible plays by BDD on his signature Zoe:

BDD’s Zoe became a huge threat, as the Mountain Soul-rift resulted in more walls for Zoe to use for her bubble, and Gen.G had great vision control to pose a constant threat from the fog of war. Jensen was able to keep TL’s hopes alive after this incredible Baron steal on Syndra:

Gen.G stemmed the bleeding and repelled TL’s Baron push, and after securing the Mountain Soul, became nearly unkillable thanks to its shield and the heals provided by Yuumi. In just under 37 minutes, they took down TL’s nexus and advanced to the quarter finals, eliminating TL from Worlds.

The LEC’s first seed had been struggling to live up to tournament expectations after a disappointing 1-2 start after week 1 and a rocky road to a 3-3 finish. They faced LNG in their elimination game, and delivered one of the most exciting games of the tournament so far.

The game started catastrophically for MAD, as they failed two top lane dives after being outplayed by Ale’s Kennen:

LNG snowballed this advantage into a gold lead, map control, and a relatively early Cloud Soul which greatly enhanced their ultimate-focused team comp (Kennen, Miss Fortune, Leona and Viego). However, this also spawned the Elder Drake and offered MAD a window back into the game using the exceptional team-fighting skills that helped win them the LEC:

With the numbers advantage, they were able to zone away the Miss Fortune and Leona to secure the Elder Drake, and converted this into a Baron and control over the game. However, Ale found a great teleport flank on Kennen and managed to pick off Gnar’s Armut and disperse the rest of MAD; with the game slipping out of their fingers, LNG seized this opportunity to push the mid wave and try to take the nexus:

With 5 enemies dead, MAD were able to make a sensational comeback and destroy the nexus after beginning the game with a series of failed plays that left them down by 1k gold at 4 minutes and must have been devastating to their mental game. LNG played a great game, but ultimately fell short to the clutch factor that got MAD the back-to-back LEC championship this year.

Gen.G and MAD then played each other in a final best of one to determine seeding, but considering both teams had played their first game of the day 9 hours before, they were exhausted and it showed in their gameplay. Gen.G secured a Yuumi first pick and paired it with an Olaf jungle, and used his powerful early game to steamroll to victory. Therefore, they qualified as the first seed while MAD advanced as the second seed.

With 8 teams qualified from the group stage, the quarter-final draw then took place:

Gen.G’s victory in the final game of the day proved to be critical, as MAD now have to face the indomitable DK in the quarter-finals while Gen.G avoid them in favour of C9. Meanwhile, there will be inter-region conflicts as RNG and EDG face off from the LPL, and T1 and HLE battle from the LCK.

We’ve already shared this play, but BDD’s incredible Zoe deserves to be viewed from his own first-person perspective to appreciate it in its full glory:

The first quarter-final will take place on Friday as T1 take on Hanwha Life Esports in a best-of-five series; see you back here for another rundown of the biggest highlights from the day.