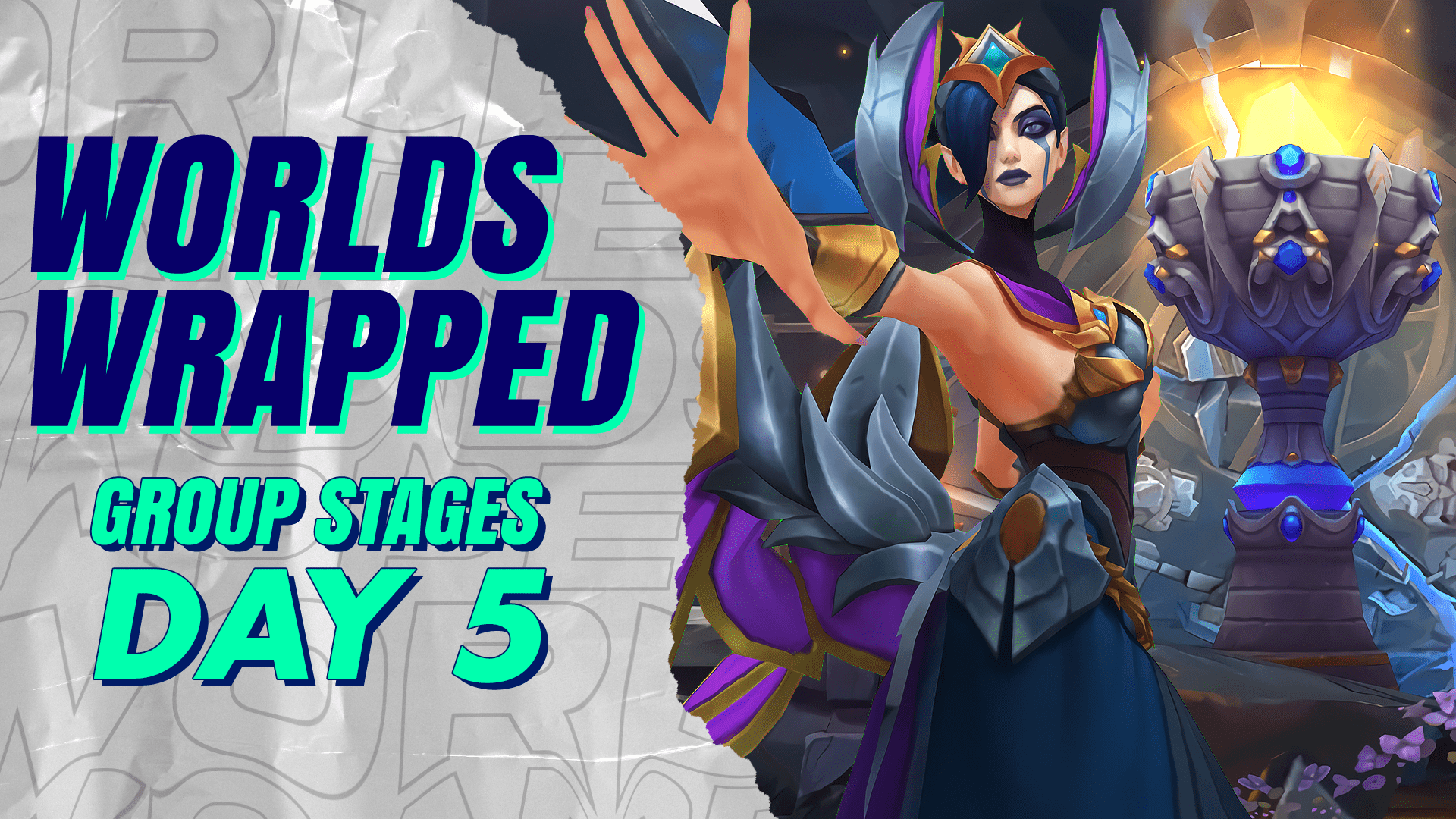 T1, Edward Gaming, 100 Thieves and DetonatioN FocusMe took to the rift today to decide which two teams would progress to the quarter-finals, and though the outcome was expected, a late upset had huge implications for the group’s seeding; let’s break down the biggest talking points from today’s games.

T1 and EDG qualify for the quarter-finals

Heading into the day, EDG were top of the group with a 3-0 start while T1 were just behind them at 2-1. Therefore, their game against each other would have major implications for the group’s seeding, as both teams had already qualified for the quarter-finals by the time they played each other. T1 made a bold choice in champion select by leaving the incredibly powerful Yuumi open and allowing her to be first picked by EDG, and responded with a composition that had a slew of CC tools:

This risk paid off, as this excellent team comp was able to lock down targets with CC and blow them up before Yuumi’s ridiculous healing would win any drawn-out engages:

It will be interesting to examine how other teams respond to Yuumi throughout the rest of the tournament, as T1 have demonstrated there are ways to nullify her with picks like Poppy and her Steadfast Presence (W) blocking Yuumi when she tries to dash between allies.

With T1 outclassing DFM and 100T, the stage was set for a tense tiebreaker rematch against EDG to decide which team would advance as the first seed. However, 100T had T1’s backs by dominating EDG in the final game of the day, allowing T1 to advance to the quarter finals as Group B’s first seed with their 5-1 record. Meanwhile, EDG advanced as Group B’s second seed, finishing the group with a 4-2 record.

100T are eliminated in bittersweet fashion

With T1 and EDG qualifying, 100T and DFM were eliminated from the tournament. 100T were brilliant in their game against EDG, using the potent Lucian/Nami bot lane to secure an early double kill and snowballing their advantage by continuously ganking the flashless enemy bot-lane:

They were then able to transition this into some brilliant team fighting, particularly Ssumday who constantly found gaps in the enemy’s vision to pull off some great flanks on Kennen:

However, this brilliance came too late for the LCS champions, as they had already been eliminated from the tournament. Meanwhile, their performance was dismal against T1 when they still had a chance of making it out of groups: they failed to do anything proactive during the mid/late game, despite locking in a Malphite, Orianna and Leona, and practically handed T1 the victory. This team proved they have the ability to take down the best teams from around the world, but questions have to be asked as to why they were unable to show up during such a high-stakes game and how much this hindered their performance at Worlds.

Considering DFM were the first team from the LJL to qualify from the Play-Ins stage and make it to groups, they should be incredibly proud of their performance. Nevertheless, securing a victory during the group stage would have been the cherry on top of the cake, which they were extremely close to achieving in their match against 100T.

Aria had an exceptional showing on Twisted Fate, making some great roams around the map to go 5/0/0 in the early game, and this translated to a healthy gold lead and absolute map control for the team. Despite being in complete control, they were unable to convert this into a victory and allowed 100T to scale into the late game and secure an Ocean Soul. From that point, DFM were torn between multiple objectives and opted for a frantic backdoor attempt:

Following this team fight victory, 100T were able to run it down mid and win the game before DFM could respawn. DFM’s final game was against T1, and though they were outclassed by T1’s macro and teamfighting, they went out in a blaze of glory by locking in Shaco jungle and  taking down Faker for first blood:

Despite being on the back foot for the entire game, 100T’s huhi’s quick thinking saved the game for his team, as he was able to headbutt Evi’s Tryndamere into the fountain and put him in range of the laser that kills Tryndamere even through his ult: