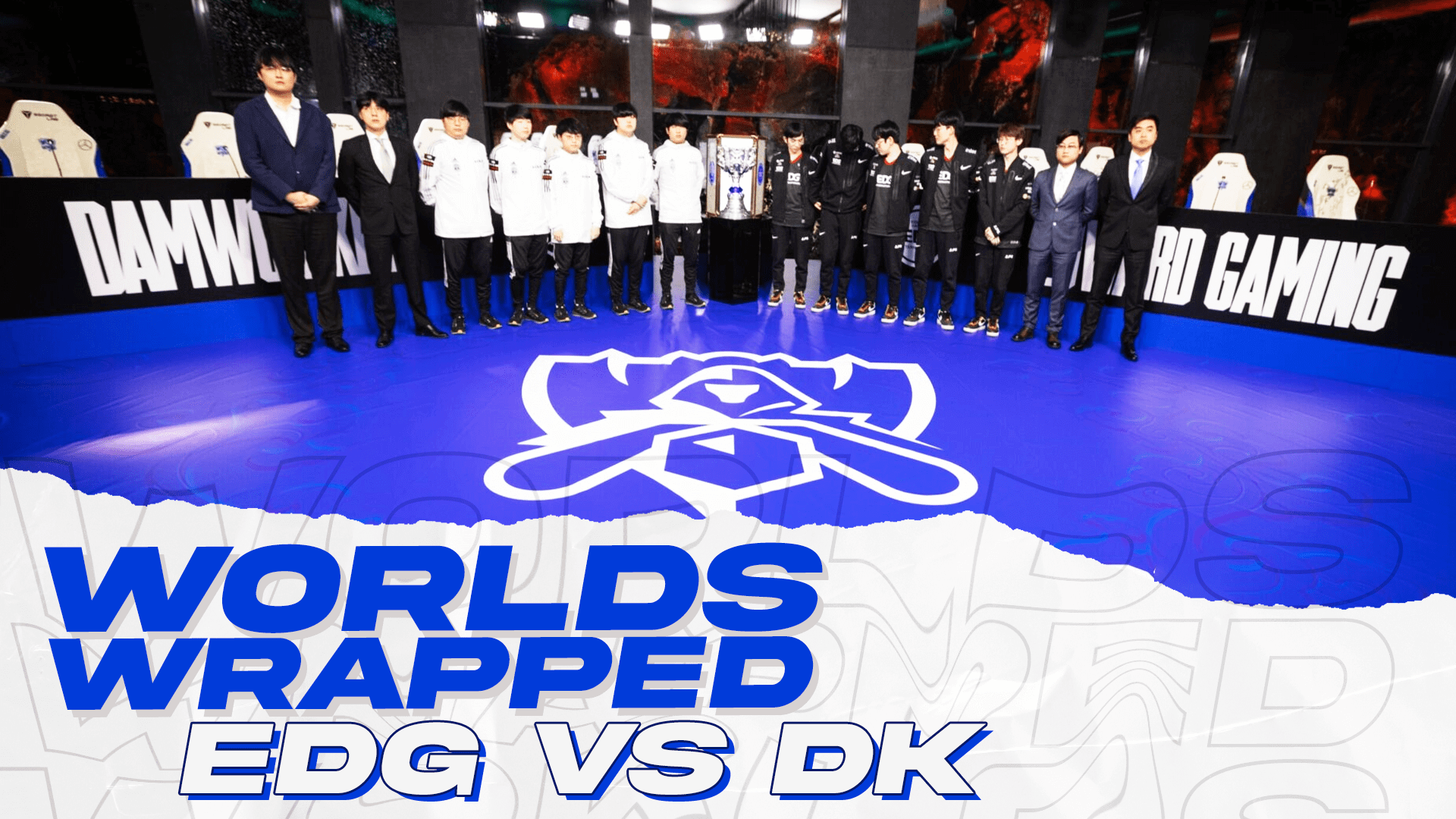 A month of intense competition between the best teams from around the globe all led to this one series, as the reigning world champions Damwon Gaming faced the LPL champions Edward Gaming for the title of the 2021 World Champions; let’s break down the highlights from the series.

The series began with an unexpected draft phase, as DK locked in ShowMaker’s signature LeBlanc and a surprising Yasuo top for Khan. EDG responded with a very intelligent Zilean support last pick, who could counter the single target burst potential of DK’s comp:

EDG began the finals off in an explosive fashion with an aggressive use of the Ryze ultimate to set up a 4-man dive in DK’s bot lane:

The Rift Herald has proven to be a point of contention across the tournament, and this series was no exception as both teams fought tooth and nail to secure a Herald. DK were able to answer EDG’s first blood quickly by punishing JieJie’s early engage:

Given the stakes of such an intense series, both teams played out the rest of the early game tentatively and neither secured a solid lead in the game. However, this quickly changed around the second Rift Herald as EDG won a team fight convincingly thanks to some flawless timing on Zilean’s ultimate and excellent bomb placement from Meiko:

From there, EDG had around a 2k gold lead and DK found themselves on the back foot. As EDG continued to stack up drakes and earned an Ocean Soul point, DK tried to trade the Baron for the Ocean Soul but were thwarted by EDG:

With this decisive team fight victory, EDG took the Baron, Ocean Soul, and DK’s nexus to strike first in the series.

After Khan’s Yasuo failed to have a meaningful impact in game 1, DK pivoted in their second draft by locking in Graves top and countering Scout’s LeBlanc with Malzahar, who can lock LeBlanc down with his ultimate whenever she engages:

DK started off the second game well, securing a couple of early kills by utilising the lethal CC chain of Qiyana, Malzahar and Leona. The game broke open in DK’s favour around the drake with a cleanly-executed team fight:

The reigning world champions continued to snowball their advantage as they consistently had the upper hand in every skirmish and translated this into absolute control over the map. This pressure allowed them to start a very early Baron at 22 minutes:

JieJie has rarely missed a Smite throughout the tournament, and continued this excellence with a clutch Smite steal while his team had their backs against the wall. Unfortunately for EDG, this wasn’t enough to stabilise the game as DK were too far ahead and were able to take the next Baron for themselves after another team fight victory:

DK instantly used their buff to push out the bot wave into EDG’s base, tying up the series 1-1:

Both teams shifted their compositions in game 3, as EDG opted for a poke composition between the Jayce top, Twisted Fate mid and Jhin ADC. Meanwhile, DK had a lot of team-fighting displacement tools with their Gragas top, Lee Sin jungle, and Sylas mid who could steal Xin’s ultimate; they also countered EDG’s poke with a Braum support, who could block a lot of the poke with his E:

Top lane was the focal point for the early game, and started with a scrappy skirmish as both mid laners teleported to the top lane:

EDG were able to get ahead early thanks to the Twisted Fate passive and the matchup advantage Jayce has into Gragas, and cemented their lead by taking the second Rift Herald. However, DK had been stacking drakes and secured an early Infernal Soul point after using their displacement tools to split up EDG and lock them down:

DK were then able to convert this in an Infernal Soul, as Khan found a crucial pick onto the two EDG carries:

This equalised the game, and though EDG had a slight gold and tower lead, DK had the potent Infernal Soul buff. DK used the increased damage to rush the Baron, and managed to secure it after Canyon found a beautiful Insec:

DK used the Baron to close out the game, earning them a match point and the chance to become back-to-back world champions.

Two enchanters were locked in for game 4, as EDG first picked Lucian while DK locked in Nami to deny EDG from the dominant Lucian/Nami lane and paired it with Jhin for the CC chaining. EDG instead locked in Lulu who could still buff up the Lucian with her W and E, and Scout’s signature Zoe:

Once again, EDG got ahead in the early game by securing two drakes, a Rift Herald, and a couple of early kills. They maintained a resectable 2-3k gold advantage, but continued to stack drakes and gained the Mountain Soul by 27 minutes. Their pressure allowed them to obliterate through the Baron before DK had a chance to respond, which they used to swiftly close out the game and bring us to a game 5 in the grand final:

The stakes couldn’t be higher heading into the draft, as the entire tournament would now be decided by a single game. DK opted for a pick comp with a Graves top, Trundle jungle, Syndra mid and Leona support, while EDG again put their faith in Scout’s Zoe and locked in Kennen top, which has proven to be one of the best picks from the entire tournament:

Mirroring the rest of the series, the first team fight took place around the Rift Herald. Beryl over-extended and was punished by EDG, but a critical auto attack on the Rift Herald’s weak point allowed DK to trade the kill for the Herald:

The gold difference remained very close throughout the early game, and though both teams secured a tower and drake, EDG pulled ahead thanks to a couple of successful ganks by JieJie. A close skirmish around the third drake was won by EDG thanks to some great vision control allowing Flandre’s Kennen to sneak in and blow up ShowMaker’s Syndra:

EDG seized control of the game, earning an Ocean Soul point at 23 minutes and accelerating the power of their scaling Kennen and Aphelios. DK were on the back foot and needed a stroke of brilliance to come back in the game:

Though this 2-man Baron was pure genius, it wasn’t enough to quell EDG’s control over the game as they secured the Ocean Soul:

Despite an undeniable advantage, the game still felt extremely close as DK refused to back down; they deterred EDG from taking the Baron, and bought enough time for the Elder Drake to spawn:

This skirmish was incredibly close and complex, starting with Meiko and Scout finding an excellent pick on Canyon to remove the possibility of a Smite steal on the Elder. ShowMaker miraculously found a pick onto Flandre’s 4/0/6 Kennen and played around the timing of his Zhonyas brilliantly, but Viper’s Aphelios was left uncontested and could run rampant in the fight. EDG used the Elder Drake buff to secure the Baron, and stormed DK’s base:

Heading into the series, many believed the final of the tournament had already been played last week when DK took on T1 in what was a phenomenal series. EDG and the rest of the LPL had looked shaky toward the end of group stage and in the quarter/semi-finals, and were coming into the finals as the clear underdog.

However, EDG silenced every critic with a sensational performance, going toe-to-toe with DK’s team fighting and demonstrating they had the ability to carry in every single lane. This is an incredible achievement for EDG considering this is the first year in the organisation’s history they advanced past the quarter-finals, and with their victory, they have regained control of the throne for the LPL; congratulations to the 2021 World Champions!

As a thank you to all that have read and kept up with us and our coverage of Worlds 2021, we'll be giving away an extra $25 Amazon Gift Card! All you have to do is share the link to this post on Twitter and hashtag it with "#WorldsWrapped with @Gamercraftgg" ! You can enter even if you've already won one of our previous giveaways!