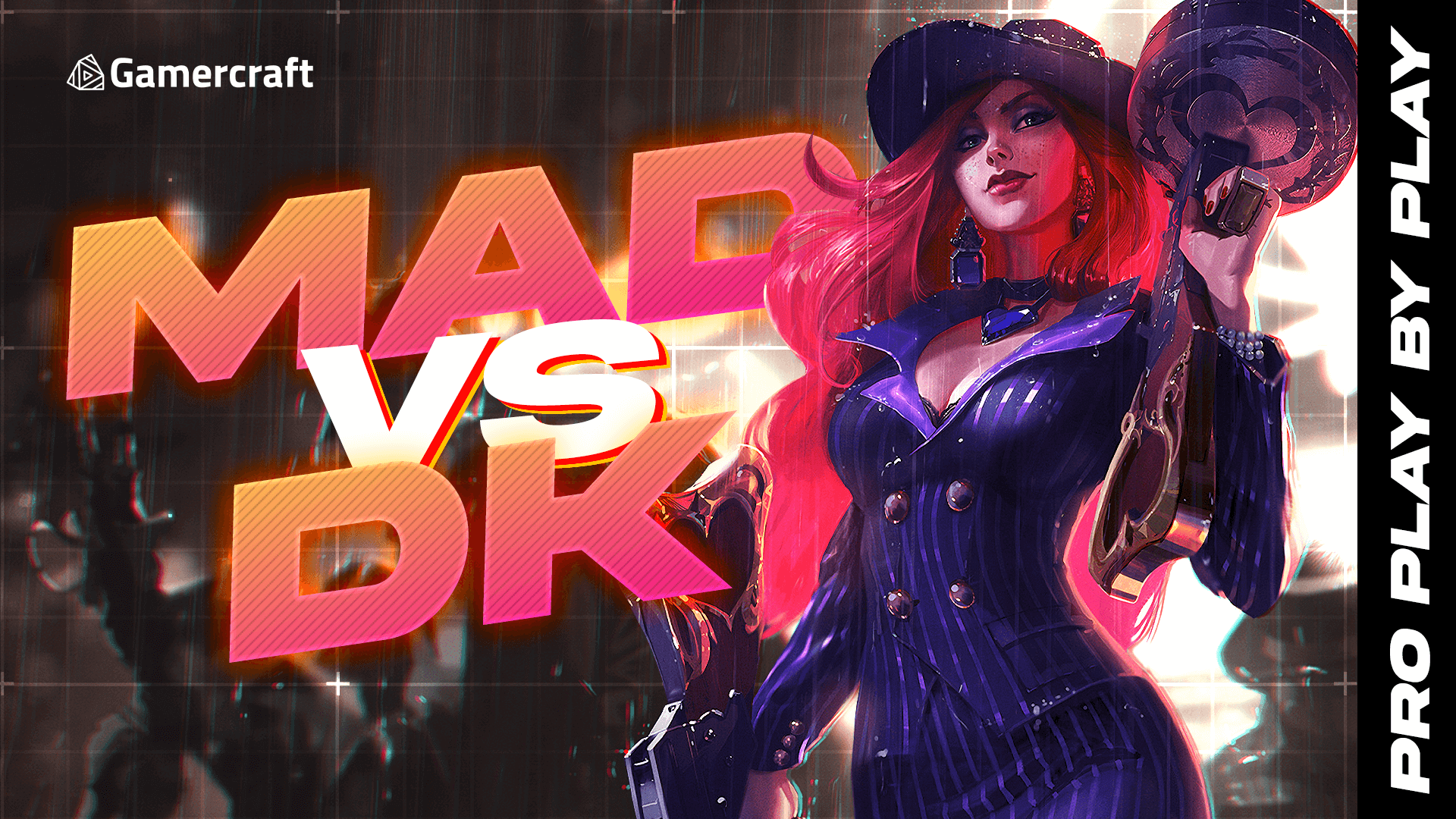 Despite absolute domination by Damwon Kia throughout the series, MAD were able to make an impressive comeback play by executing a great pincer movement around the Baron pit; let’s break down how they did it.

MAD are in a perilous situation and are in a 9k gold deficit at 22 minutes, while DK are pushing their advantage by trying to take the Baron and using it to break open MAD’s base. Between the Jayce, Syndra and Ziggs, DK have a poke orientated comp while MAD have a team fighting comp with their Wukong, Miss Fortune and Rakan.

At the beginning of the clip, Carzzy (Miss Fortune) is making his way to the Baron pit from base, meaning DK have a numbers advantage as they find themselves in a 5v4. They utilise this numbers advantage to zone MAD away from the Baron with the threat of a hook from BeryL’s Pyke and the poke damage from Khan’s Jayce and Ghost’s Ziggs:

However, Armut (Wukong) has evaded DK’s vision and is making his way behind the Baron pit, narrowly dodging Canyon’s ward by taking the blast cone for the mobility:

It was critical for Armut to avoid being spotted, as he was able to make his way to the other side of DK completely unnoticed and could initiate the pincer movement.

Part 2 - Collapsing from both sides

By the time DK have realised Wukong is approaching them from the top side of the map, it’s too late as MAD are already collapsing upon them from both sides:

ShowMaker was able to land a brilliant two-man stun using Syndra’s Scatter The Weak, preventing Elyoya’s Gragas and Kaiser’s Rakan from following up with their Body Slam and The Quickness. However, Humanoid’s Viktor was not hit by the stun and is free to land a huge amount of burst damage on the squishy Syndra and Pyke.

By using their CC tools, MAD have successfully split up DK and mitigated a lot of their 9k gold lead: instead of taking a straight up 5v5 they would probably lose, Armut is winning a 1v2 thanks to Wukong’s ultimate while the rest of MAD can take an even 3v3 fight. This 3v3 quickly becomes a 4v3 in MAD’s favour as Carzzy has used Miss Fortune’s innate mobility to join the fight and shreds through ShowMaker and Beryl with Bullet Time:

With Showmaker’s Syndra down and the rest of DK low, they scatter in an attempt to escape the fight. Beryl tries to use Pyke’s slipperiness to escape, but Carzzy follows him with an aggressive Flash to finish off the squishy Pyke:

MAD are able to finish off Ghost and Khan by once again collapsing from multiple angles, trapping them in and preventing any possible escape routes:

Off the back of this play, MAD were able to secure the Baron and stage a comeback in the game, though this wasn’t enough to earn a victory.

Considering MAD were 9k down at the time of this fight and on the precipice of losing the game, it was extremely impressive for them to find this angle and an opportunity to come back into the game. Always keep an eye out for chances to make a deep flank when the enemies are around the Baron or Drake pits, as winning a fight and translating this into a big objective can be the play your team needs to come back in a game.