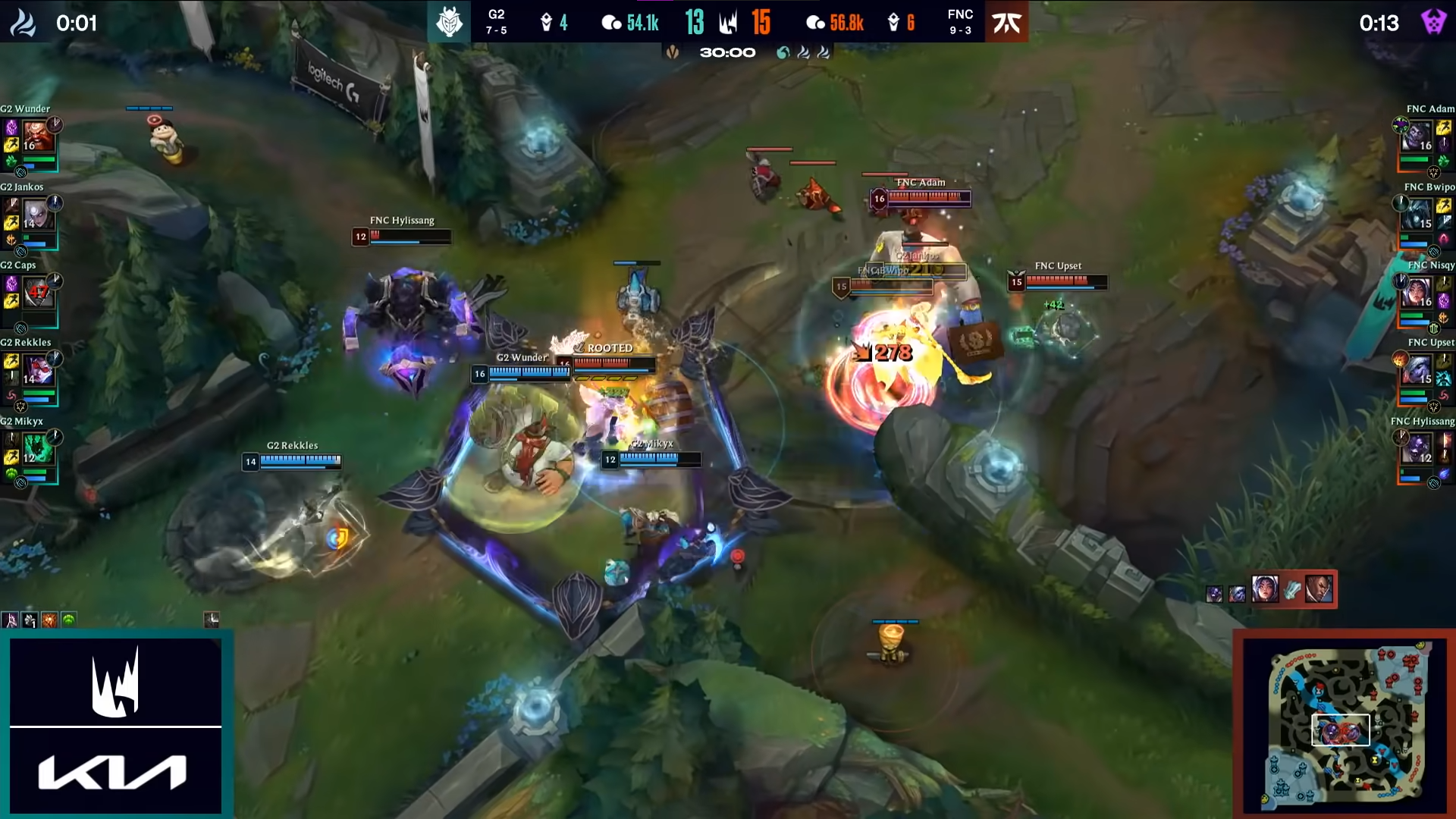 FNC vs G2 is one of the most historic and competitive rivalries in League’s eSports scene, and last week’s game in the LEC was no exception. After a close game with back and forths throughout, FNC managed to claim victory thanks to a divisive team fight.

At the beginning of the clip, two major objectives are spawning imminently: Baron in around 40 seconds, and a potential Cloud Soul Drake in 25 seconds should FNC’s take it. Both teams have good scaling between G2’s double AD comp featuring Vayne and Lucian and the late game potential of Tristana and Karthus for FNC.

Part 1: Poking before an objective

Considering both teams are posturing around the Cloud Drake and setting up vision near the objective, they are looking for a fight once it spawns. Consequently, Caps looks to poke two of FNC’s greatest threats in Irelia and Tristana before the fight begins using Lucian’s long range abilities (The Culling and Ardent Blaze):

If Caps can land some good poke before the fight begins near the drake pit, this will instantly give G2 an advantage going into the fight. However, most of his poke misses as Upset is able to Rocket Jump away.

Despite this, Caps continues to push forward and look for damage and decides against taking Thresh’s Dark Passage to safety:

This appears to be a greedy play:

Hylissang had been waiting on Alistar in the darkness above the river to engage, and lands a beautiful Flash → Headbutt → Pulverize combo that allows Tristana and Irelia to blow Caps up:

Had Caps not been greedy and over-extended, he could have taken Mikyx’s Dark Passage to safety and FNC wouldn’t have found this opportunity to engage. In addition, Dark Passage -- one of the strongest escape tools in the game for vulnerable carries -- is now on cooldown and will not be available for the rest of the fight.

Once Caps has been caught, G2 scramble together for the fight as Adam’s Dr. Mundo teleports in. Wunder uses Gragas Explosive Cask to knock away Upset to mitigate his damage and put the Irelia in the position where Rekkles’s Vayne can DPS her:

Though this Cask achieved both of those goals, it also had the unintended consequence of displacing the minions. One of these minions ended up saving Bwipo’s life, as it blocked and incoming Death Sentence from Mikyx’s Thresh which would have interrupted Karthus’s Requiem and led to a death for Bwipo:

Such an unexpected and unusual interaction was incredibly fortuitous for FNC yet unlucky for G2, as it’s near impossible for Wunder to have considered this potential outcome in the 0.1 seconds he had to make the play.

Consequently, Jankos has to blow his combo on the Karthus and use his Moonfall to interrupt Bwipo’s powerful Requiem. This puts him in a vulnerable position in a 3v1, and though he is able to take down the squishy Karthus, Upset quickly dispatches Jankos:

While his teammates deal with Jankos, Nisqy’s Irelia is looking to take down Mikyx’s Thresh. However, Rekkles’s Vayne is able to proc Nisqy’s Sterak’s Gage shield thanks to Silver Bolts:

With Rekkles already melting through Hylissang’s Alistar, and with Jankos trading deaths with Bwipo, the teams are in a 3v3. Rekkles still has Vayne’s ult going, and sees an opportunity to secure a kill by landing the third stack of Silver Bolts on the low-health Irelia:As Irelia has been able to escape by using Bladesurge on a minion, Rekkles must Flash in order to get in range to land the third auto attack. However, he is eviscerated by the fed Tristana who has already reached her late game power spike, before he can finish off the Irelia. From there, Upset and Adam chase down the Thresh, winning the fight and ultimately the game for FNC.

As Irelia has been able to escape by using Bladesurge on a minion, Rekkles must Flash in order to get in range to land the third auto attack. However, he is eviscerated by the fed Tristana who has already reached her late game power spike, before he can finish off the Irelia. From there, Upset and Adam chase down the Thresh, winning the fight and ultimately the game for FNC.

While some will look at Rekkles’s Flash as the moment G2 lost the teamfight, Caps’s over-extension put G2 in a 4v5 disadvantage. Disengaging after Tristana had jumped away would have been the safer and better play, and would probably have led to a more even team fight.