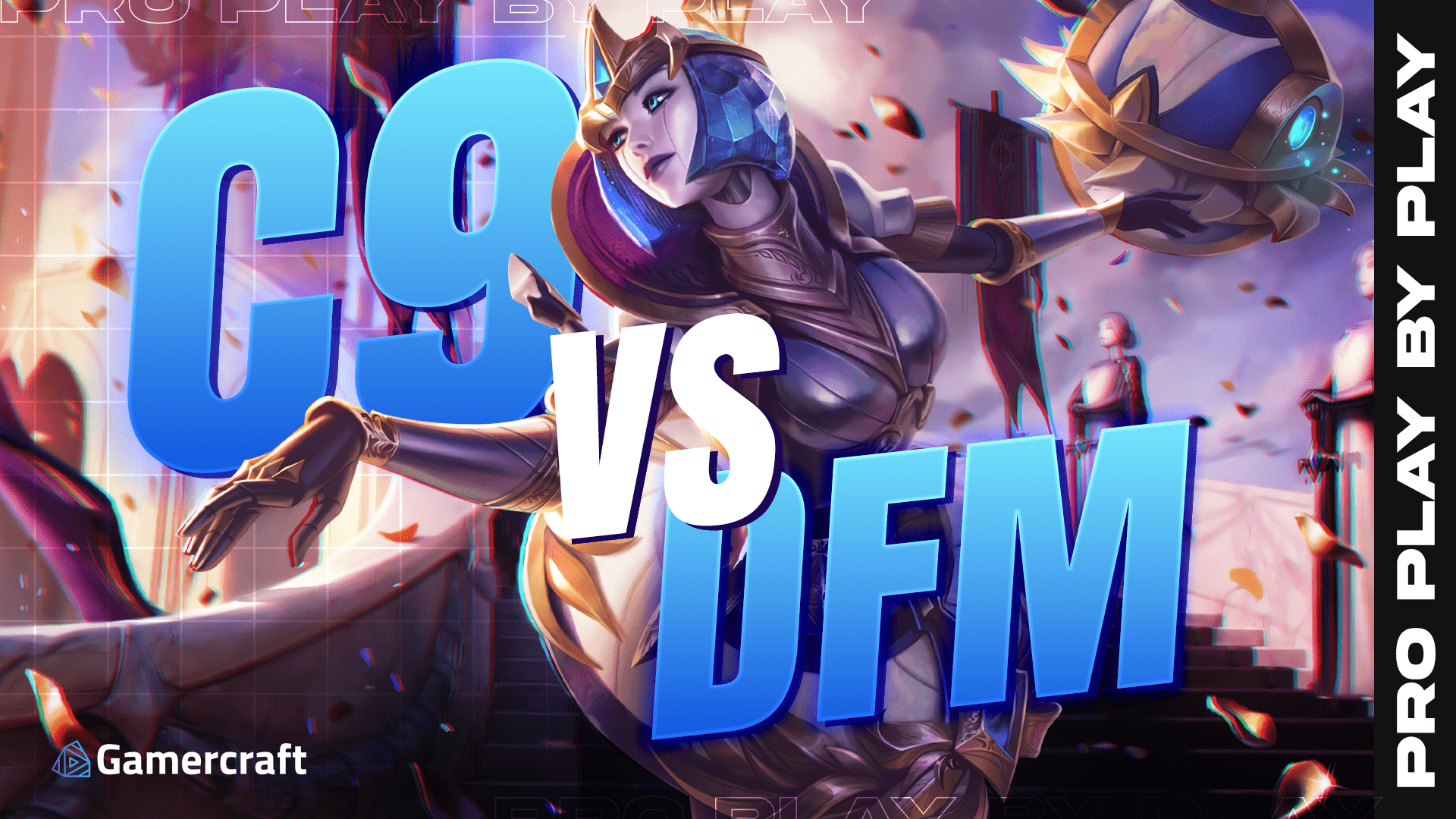 In a tense tiebreaker game during the Worlds Play-Ins stage, DFM take an excellent team fight by playing around objectives and splitting up Cloud 9; let’s break it down.

State of the game

Throughout the early game, C9 had used the early power of their Olaf jungle to get ahead, taking a gold lead and securing 3 drakes. As the game transitioned into the mid game, DFM managed to close the gap to an 1000 gold difference, but had to contest the upcoming drake else relinquish the Infernal Soul to C9.

At the beginning of the clip, the important Infernal Drake is spawning in around 30 seconds. In preparation for this, DFM push out the mid wave as this forces C9 into a lose-lose scenario: they can either respond to the mid wave and cede pressure around the drake, or stay near the drake but lose towers in the mid lane.

Though this is a good decision by DFM, it is not perfect and would have been better if they had already set up vision around the drake pit. C9 had placed many wards around the drake, which could be used to give them the upper hand should a fight break out near the pit:

To compensate for this weakness, DFM instead force an engage in the mid lane before the drake even spawns. This is an excellent decision for two reasons:

After taking down the mid lane turret, DFM capitalise on C9’s poor positioning by focusing down the isolated Olaf. Though Blaber’s Olaf is fed and very durable thanks to his ultimate, he is not invincible and is chunked down pretty low. Aria makes an exceptional decision on Orianna by placing her ball near the top side river to zone away 2 members of C9, as if they try to move through the choke point to help out Blaber, they are at risk of getting Shockwaved:

This forces Vulcan and Fudge into a tricky position, as Fudge has to back away out of respect and is forced to poke from afar. Meanwhile, Vulcan is much more tanky on the Amumu and decides to take the damage in order to help out Blaber. Unfortunately, he attempts to use the powerful Flash + Q + R Amumu combo to lock down Yutapon’s Ezreal, but Ezreal is able to Arcane Shift away milliseconds before Vulcan pulls the trigger:

Vulcan is then stuck in a very tricky position, as he has blown his Flash and one of his Q’s, but can’t get close enough to DFM’s carries to lock them down. Therefore, he is forced to blow his ultimate on the less valuable Sett and Xin Zhao before swiftly dying.

After taking down the Amumu support and getting the jungle Olaf very low, DFM press the attack and look to clean up the fight. Gaeng lands a fantastic Flash + E combo on Leona to lock down Perkz’s Zoe, who is swiftly dispatched by the Ezreal. Blaber attempts to escape on Olaf, but it’s not enough to escape the mobile DFM composition:

On the back of this team fight, DFM are able to take the Baron and take control of the game using the buff. However, some credit does need to go to Fudge and Zven, as they are able to survive the fight and trade the Baron for the Infernal Soul. This could have been enough to win C9 the game given how well it synergises with their poke comp (Jayce, Zoe, Miss Fortune), but DFM were able to play out the remaining team fights with ease thanks to their composition.

This team fight demonstrates how to take fights in positions that benefit your team, and how to effectively zone away enemies from a team fight. DFM knew fighting near the drake would have been difficult due to their lack of vision, and therefore identified the mid lane as a potential point of power by pushing the wave out. They then forced an engage, and took advantage of the dispersed C9 members to win the fight. Additionally, they used their zoning tools to completely zone Fudge and Zven away, who couldn’t meaningfully contribute to the fight on Jayce and Miss Fortune. This ensured DFM always had the numbers of advantage to guarantee them success in the fight.