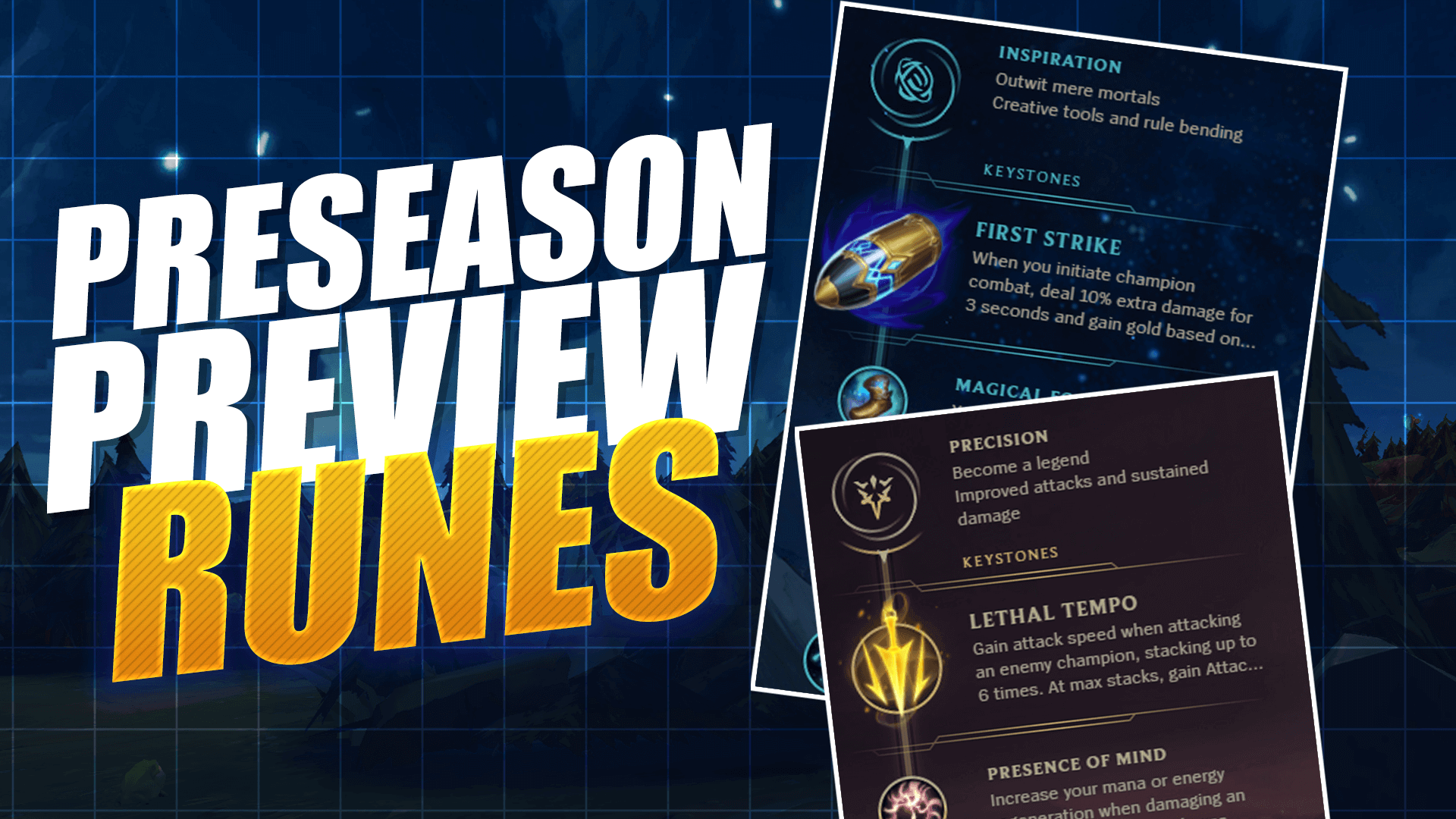 The second major update coming to League of Legends' preseason introduces a new keystone and changes some old ones; let’s break down the changes.

The newest keystone debuting in the preseason is First Strike:

First Strike works in a similar fashion to Kleptomancy, an old keystone which granted gold and items for landing abilities and auto-attacks. However, unlike Kleptomancy which was best utilised by poke champions, First Strike amplifies burst damage dealt over a short period of time and grants gold based on the damage done. This will be an interesting alternative to Electrocute as it sacrifices some burst damage in favour of gold, and will be optimally used if champions can consistently proc it during the laning phase to maximise the gold generation.

Considering First Strike only procs if you damage an enemy champion within 0.25 seconds of entering champion combat, it’s important you react quickly if you are the one being engaged upon. 5 gold is instantly granted upon proccing First Strike, while the gold from the bonus damage is granted once the effect has ended.

First Strike will also be replacing Omnistone, which was a niche and rarely seen keystone that struggled to find its place in the meta outside of being a fun gimmick.

Lethal Tempo will also be receiving a rework in the preseason:

Although Lethal Tempo has a 6 second duration, it does not have a cooldown meaning it is possible to constantly refresh the duration by continuously auto attacking. You also don’t lose all your stacks instantly, as you will rapidly cycle through each stack before dropping to the next one, meaning it is possible to refresh your stacks if you can land another basic attack during this time. If you are able to generate and maintain max stacks during a team fight, your attack speed and range will be devastating and will allow you to shred through targets from afar. Considering your attack speed can exceed the cap, Lethal Tempo can work particularly well on ADCs when paired with an enchanter who can buff your attack speed (such as Lulu’s W or Ardent Censer).

However, it’s important to note you can only produce one stack per basic attack even if that basic attack damages multiple champions. In addition, this keystone may not be particularly effective in the early game when you don’t have a lot of attack damage to take advantage of the increased attack speed.

The final keystone to receive changes is Glacial Augment:

This iteration of Glacial Augment is much more utility focused and will shine in team fights, as it creates frozen zones covering a good amount of space that enemies will have to play around. The slow provided by these zones will make it easier to continue a CC chain on a locked down enemy, but has eclectic benefits as it can also be used to help disengage from enemies or save your allies thanks to the reduced damage reduction.