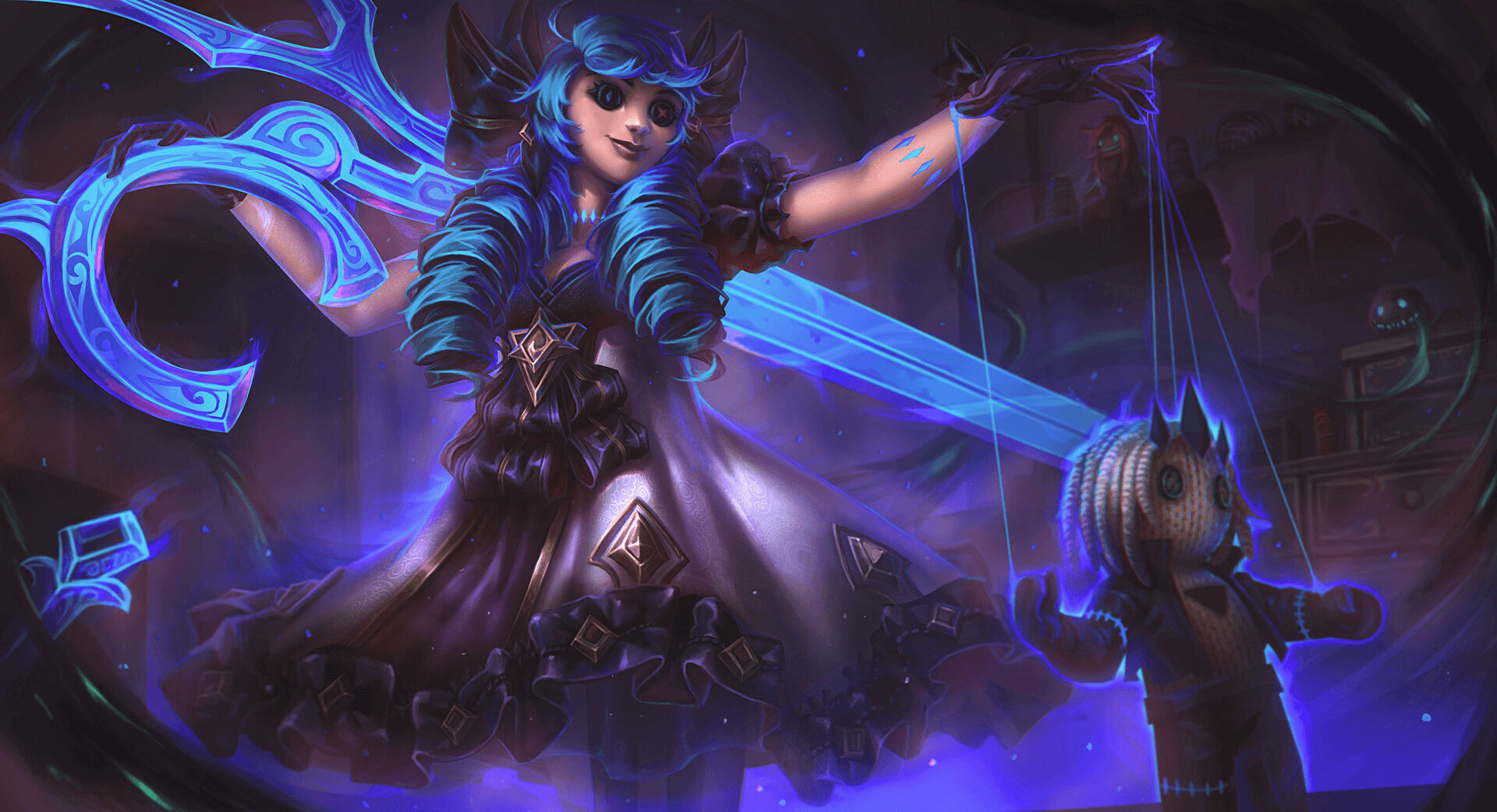 At the beginning of the year, Riot announced 2021’s champion releases would have much more of a narrative focus, and explore the fable of the Ruined King Viego. Gwen offers us an insight into Viego’s past as she debuts on the rift with her bruiser-centred (sewing) kit.

Q – Snip Snip! – Gwen snips all enemies in a cone in front of her dealing magic damage, with the last snip dealing substantially increased magic damage. If the enemy is in the centre of each hit, Gwen deals true damage to that target instead and procs her passive. Every time Gwen attacks an enemy with a basic attack, she gains 1 stack (maximum 4, lasting 6 seconds). Upon using this ability, Gwen consumes the stacks to snip additional times (1 snip per stack).

‍W – Hallowed Mist – Gwen becomes surrounded in mist for 5 seconds, becoming untargetable to all enemies (except towers). While in the mist, Gwen gains armour and magic resist. Gwen can recast this ability once to move the mist to her current location; this happens automatically the first time Gwen leaves the mist.

Gwen is an AP orientated, top-lane bruiser; she wants to swoop into a fight, deal some damage with her abilities and basic attacks, then weave back out while her abilities come off cooldown. Her bread-and-butter combo during laning phase is to dash in using her E, attack the enemy a few times with her enhanced auto attacks, before finishing with an enhanced Q and escaping using her W for a safe disengage. The more basic attacks you land, the more stacks will be accumulated for her Q, but don’t get too greedy! It’s not worth over-extending for a bad trade just for one extra auto attack and Q snip, as the final snip deals the most damage and therefore, is the most important one to land. Always try and line up the enemy champion in the centre of her Q cone, as this deals true damage, procs her passive, and maximises her trade potential.

Hallowed Mist is a very useful disengage tool, making Gwen untargetable and granting her armour and magic resist. It’s a very flexible ability, as it automatically moves with Gwen the first time she exits the mist, and can be used in combination with her to remain untargetable as you either engage or disengage. However, you will still draw turrets aggro even if you are in the mist, so be careful during tower dives! Gwen’s ultimate, Needlework, is another flexible ability, as it can be used for waveclear, to snipe off escaping enemies, or during a skirmish. Considering it procs her passive, healing Gwen, it can be particularly lethal during a skirmish to turn the tides of a fight. Remember, Gwen must attack a champion, minion or monster with a basic attack or another ability in order to cast the more powerful 3 needle attack, and attack again to cast the most powerful 5 needle attack. Remember to weave those in during a skirmish or while wave clearing to ensure you’re maximising the ult damage!

Conqueror is an excellent choice to accommodate for Gwen’s focus on healing and her bruiser, skirmish-centred playstyle. Triumph, Taste of Blood and Ravenous Hunter enhance how much self-healing Gwen can do, making her a frustratingly durable laner to play against. Last Stand is particularly useful for Gwen, considering this will enhance the healing done by her passive whenever she is vulnerable.

Given Riftmaker’s innate omnivamp and increased damage during skirmishes, it is an excellent mythic option for Gwen. Nashor’s Tooth is also essential on Gwen, providing Gwen with ability power, attack speed, and enhanced basic attacks based on her ability power, complimenting her kit perfectly. Both Plated Steelcaps and Mercury’s Treads are viable on Gwen, so opt for whichever counters the enemy team comp best. Finally, Zhonya’s Hourglass is a great choice against a heavy AD team, providing Gwen with the vital few seconds she needs for her cooldowns to refresh should she find herself outnumbered and trying to escape.

Gwen is a quintessential bruiser, so try her out if you have a penchant for Irelia, Riven or Renekton. Her kit is diverse, and though she’s designed to be a top laner, this seamstress may well find her place in the mid lane, using her E and W to roam quickly around the map and cut down any unsuspecting enemies.