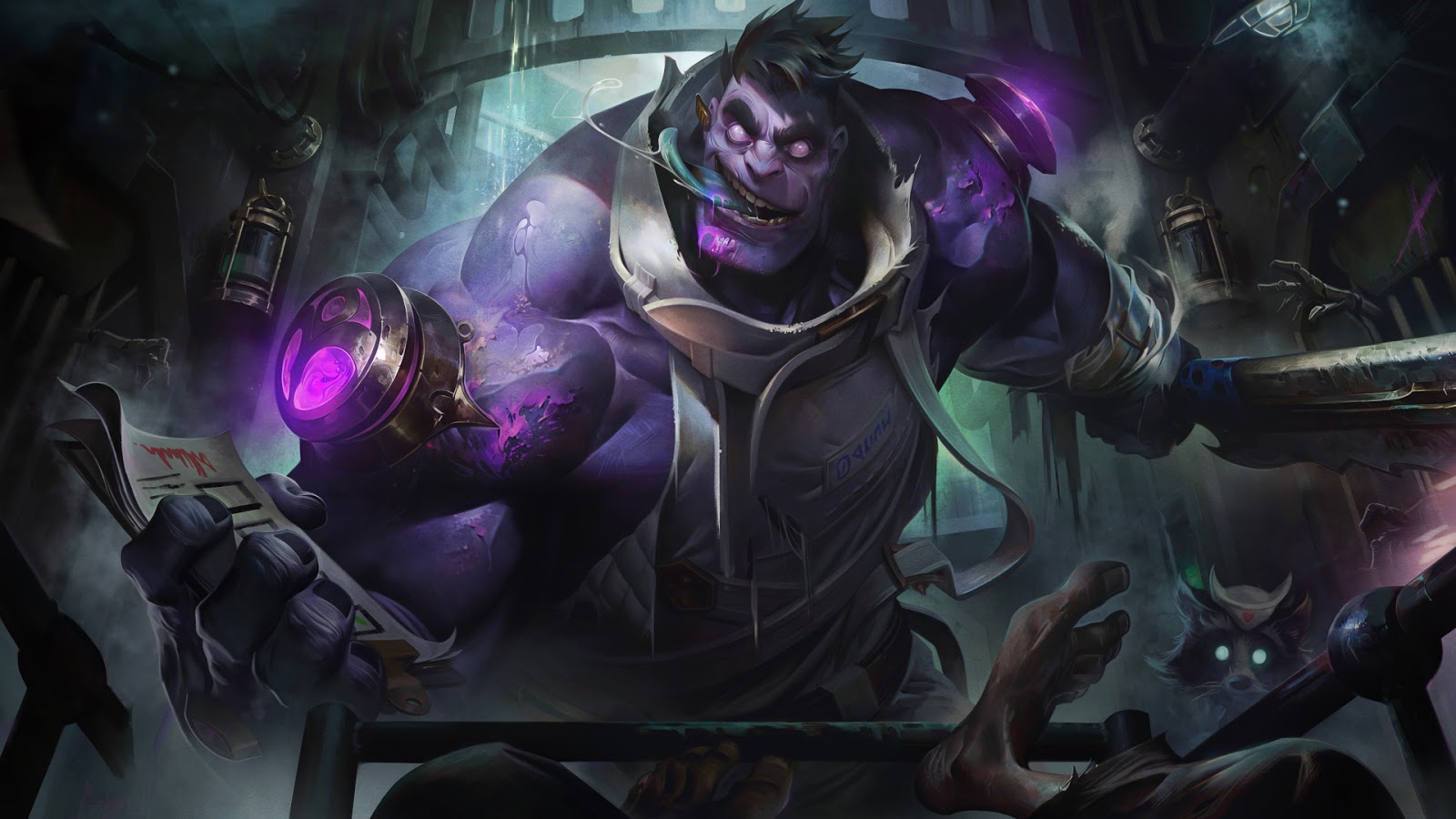 Runeterra’s most questionable medical practitioner has just received a visual-gameplay update, and has retained his core identity while having his abilities modernised.

Passive – Goes Where He Pleases – Dr. Mundo receives increased health regeneration based on his maximum health.

Dr. Mundo is able to resist the next immobilising effect that hits him and instead loses current health and drops a cannister nearby. If Dr. Mundo walks over the cannister, he restores a portion of his maximum health and reduces this passive’s cooldown. However, enemy champions can walk over it to destroy it.

Q – Infected Bonesaw – Dr. Mundo throws his cleaver, damaging and slowing the first enemy hit. This heals Dr. Mundo if an enemy is hit, and the magic damage dealt is based on the target’s missing health

W – Heart Zapper – Dr. Mundo electrocutes himself for a few seconds, dealing constant magic damage to nearby areas and storing a portion of the damage taken as grey health. At the end of the duration, Dr. Mundo deals magic damage to nearby enemies and heals the grey health if an enemy is hit, though this heal is reduced if only minions or monsters are hit. This can be recast to end the effect early.

Dr. Mundo empowers his next basic attack to gain extra range and deal physical damage based on Dr. Mundo’s missing health. If the target dies, the corpse is thrown in a line to deal damage to all targets it passes through.

R – Maximum Dosage – Dr. Mundo instantly heals a percent of his missing health. He then heals a portion of his maximum health over a long duration, gaining bonus movement speed and attack damage while healing.

As previously mentioned, this update has ensured Mundo has maintained his core identity of a tank that is perpetually in your face and whose kit revolves around using health to cast abilities and regenerate missing health.

The rework has primarily improved Mundo’s laning phase, and his new E (Blunt Force Trauma) and W (Electrocute) are effective forms at clearing and pushing waves. In addition, killing a minion with Blunt Force Trauma (E) means it will be pushed back to damage any enemy hit behind it, which can be a useful poke tool that works in a similar way to Sion’s E (Roar of the Slayer).

Mundo’s Q (Infected Cleaver) hasn’t really changed much, and still works as a poke tool or to initiate a gank thanks to the slow provided. Keep an eye out for the cannisters that drops from his passive (Goes Where He Pleases) and get there before your opponent can destroy it, as it provides a good burst of healing and reduces the cooldown of your passive. However, don’t over-extend for it if it lands in an unfavourable position, as you may take more damage than the heal it provides.

In team fights, Dr. Mundo will still be running around absorbing a ton of damage and sticking to his enemies thanks to his R (Maximum Dosage), but his new W (Electrocute) now offers him an additional layer of sustain. Timing is everything, as you want to use it as a lot of damage is incoming, which you can absorb and heal up from once the ability has ended.

Sunfire Aegis and Frostfire Gauntlet are both excellent choices for Mundo’s mythic, as they provide tanky stats and an Immolate aura that deals damage to the nearby enemies Mundo is sticking onto. Aegis is slightly better if you are looking for wave clear and the ability to push out waves, while Gauntlet could enhance Mundo’s pick potential.

Given how many of Mundo’s abilities scale from health, it remains as Mundo’s favourite stat. Therefore, the recently buffed Warmog’s Armour is an excellent choice, as are Abyssal Mask and Randuin’s Omen for AP and AD threats respectively. Spirit Visage is another fantastic item for Mundo, as it provides more health and a major buff to healing received, enhancing the self-healing Mundo produces and accommodating for the fact his abilities cost health to cast.

In summary, long-time Mundo players are unlikely to find the new Mundo to be a drastically different experience; he remains as a champion that is easy to pick up and can run around in the front line absorbing a ton of damage for your team.