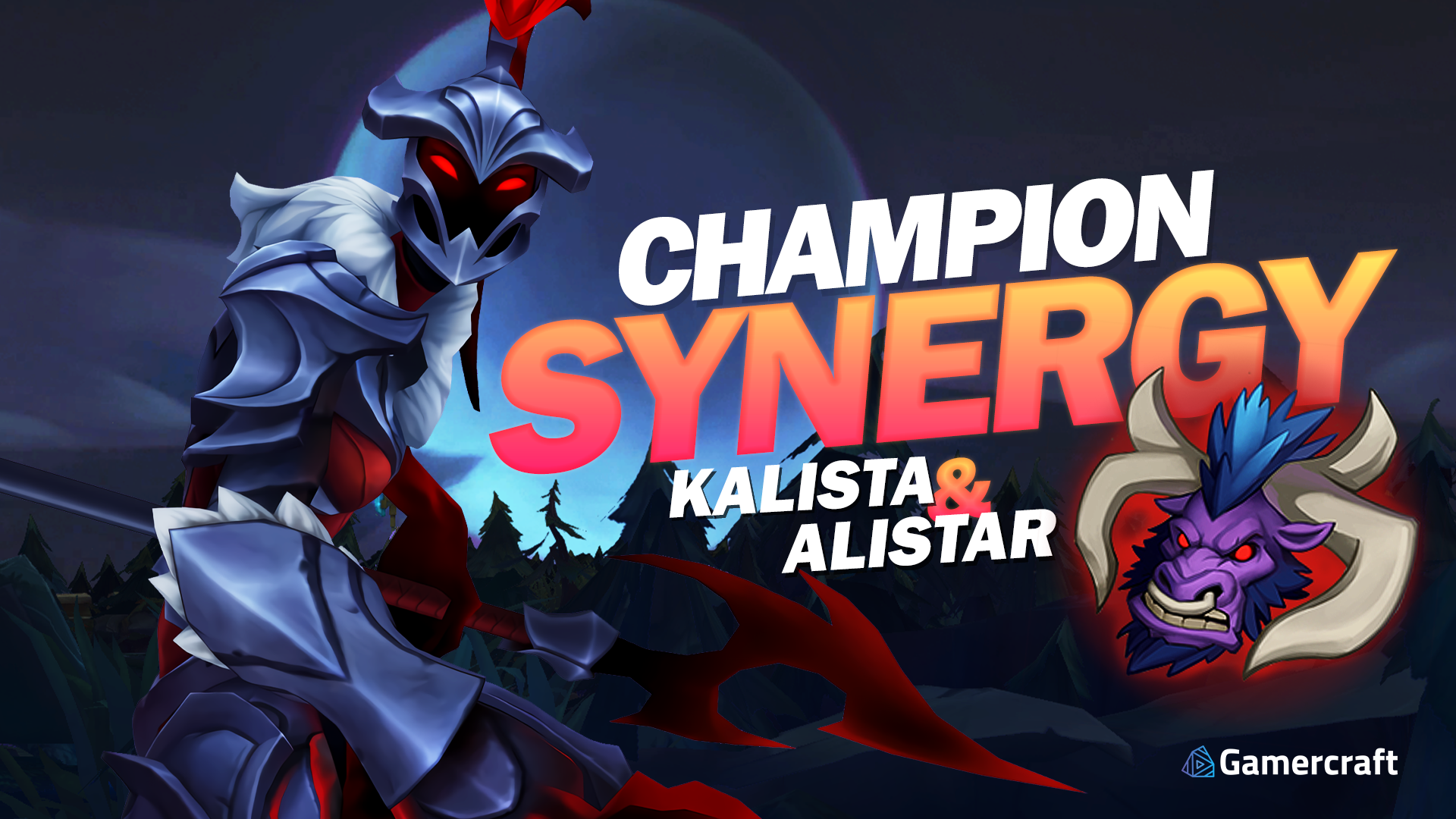 If you are looking for an aggressive bot lane with fantastic engage potential, good burst, and natural synergy, then look no further than Kalista and Alistar.

At the beginning of the game, you’ll want to make sure you use the Black Spear on your Alistar, as you will both benefit most from this binding. Both Kalista and Alistar are quite weak at level 1, and become much stronger at level 2 once they have unlocked a second ability and are able to pull off their combos. Therefore, you will be looking to clear the first wave and a half as quickly as possible, while Alistar should accelerate this by using his Relic Shield stacks on the minions.

Once you have reached level 2, you should look to play aggressively; as the last couple of minions you need to level up are about to die, you should start moving up in the lane to get ready to strike. Alistar should engage using his Headbutt/Pulverize combo (W+Q), while Kalista should slow the target with her Pierce (Q) and finish off the target with Rend (E) once enough stacks have been accumulated. You may need to use your summoner spells to secure the kill, but this is a very consistent and strong play that often nets you a kill.

During team fights, Kalista will be looking to maneuver her way around the fight using her passive (Martial Poise), avoiding threats looking to dive her and chasing any vulnerable enemies. Meanwhile, Alistar should be using his Headbutt/Pulverize combo to peel for his Kalista or look for engages, using Unbreakable Will (R) for survivability.

Kalista’s ultimate (Fate’s Call) works excellently in this duo, as it has multiple uses. Firstly, it can be used as a disengage tool if Alistar has low health and is in danger of dying. Secondly, it can be used directly on enemies as a great form of engage, as it can be followed up with Alistar’s Pulverize for a lethal CC chain. Finally, it can be used a gap closer, as Alistar can use it to get in range to use his Headbutt/Pulverize combo.

Hail of Blades is a fantastic keystone choice on Kalista, as it provides her with a lot of attack speed in the early game to generate more Rend stacks and secure kills in the early game. Immortal Shieldbow increases Kalista’s survivability in case she is ever caught out, while Runaan’s Hurricane and Guinsoo’s Rageblade increase her attack speed and thus the amount of Rend stacks she can accumulate and her mobility thanks to her passive.

Meanwhile, Phase Rush works really well on Alistar, as he can easily proc it thanks to his Headbutt/Pulverize combo followed by an auto attack, and can use the burst of movement speed to catch another target with his Trample (E) stun. Aftershock is also a great choice due how consistently Alistar can proc it and how much tankier it makes him, but may not always be necessary in this combo thanks to the extra protection Fate Call grants him. Locket of the Iron Solari and Knight’s Vow augment Kalista’s damage and protect her from any threats.

Looking for engage opportunities is the name of the game when it comes to this combo, thanks to their slew of engage abilities. Keep an eye out for any out of position squishys, and don’t be afraid to pull the trigger!